Are you ready for some Bowdenball? 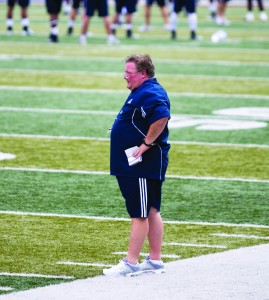 Dadgum. A word that now finds itself resonating in Akron, Ohio.

It is a word that every Akron football fan first heard over eight months ago when Terry Bowden, and his southern roots, were announced as head coach.

The word has played as the headliner for an important offseason for the Zips, as Bowden looks to revive a program that is coming off back-to-back 1-11 seasons.

“The first year you take over a program there are so many things you have to touch on,” said the first-year coach. “We have to work our way up, and I think the players are excited about that.”

While his linguistics have inspired an offseason buzz from several national media outlets, Bowden’s first real test will come in front of his home crowd on Thursday night. The Zips will take on Central Florida with kickoff scheduled for 7 p.m.

What fans will see on that night may not resemble what they saw at the end of last season.

A pro-style offseason has been scrapped to increase pace and give playmakers space to operate. Last year’s starting quarterback, Clayton Moore, is no longer even on the roster. A new coaching staff will run the sidelines. Even leading rusher, Jawon Chisholm, switched his number from 44 to 7.

The uniforms will still be blue and gold.

Chisholm will be joined by Stephen F. Austin transfer, Dalton Williams, who will replace Moore under center. The path was made clear for Williams, who has a year of eligibility left, as the high-tempo offense formed more around his style of play.

The offense will not be the only side of the ball getting a facelift. New defensive coordinator, Chuck Amato, will look to resurrect a defense that ranked 116th in the country a year ago (out of 120).

While Bowden has ushered in a new era of Zips’ football, it is the players that have adapted to his system and go into the season with a new-found optimism.

“I think out of everybody I’ve coached I’ve seen this team work harder because of where they want to be,” said the head coach. “I think we have a great team to work with.”

The positive outlook was rare a season ago with Rob Ianello at the realm, but wins will be the only thing that ultimately determines its longevity. A win Thursday night certainly would not hurt.

Preseason polls have the Zips finishing 6 out of 7 teams in the MAC East. The lone team to trail the Zips is conference newcomer, UMass.