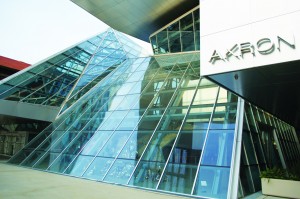 On August 16, eighteen musicians from around the area gathered at the Akron Art Museum to watch their creations come to life.

Each musician had two weeks to score a three-to-five-minute section of the 1920 silent film, “The Cabinet of Dr. Caligari.” The final production, an event named “The Collective Soundtrack,” was presented to the public at the Akron Art Museum. The event was one of many created by Akron Film+Pixel, a social organization for fans of film and games.

When the lights dimmed in the museum’s theater, a burst of music filled the room, overpowering the senses. Each musical piece was filled with various sounds and instruments, perfectly fitting the mood and atmosphere of the scene depicted.

It was interesting to wonder what sounds would come next. In some scenes, the music was soft and mellow; in others, strong and eerie. The reception of the collaboration was clear from the audience’s reactions: laughter, shock and wonder.

The added background music incited a strong emotional response. As an audience member, you could really appreciate the mood of each scene more than you would without any score accompanying the film.

James Robert Ballard, a singer, songwriter, producer and film music composer, explained how this soundtrack was different from his other work. When creating the soundtrack, Ballard concentrated on his own clip, rather than watching the whole film.

“There was no director to please. I was my own director. The clip I had was bizarre and funny, so I wanted to have fun with it,” he said.

Artist, composer and guitarist Chris Edwards pointed out that the right instruments are needed in order to express emotion, which is very important.

Some participants composed their music in groups. The youngest contributors to The Collective Soundtrack were 11-year-old Midge Ramone and 14-year-old Vivian Ramone, sisters who started recording and performing their own brand of music seven years ago, under the name ShiSho.

“I got a bunch of musicians together to watch the movie with a lot of different instruments,” she said.

Spencer and her group improvised the music while watching the film. Later, they cut down the music that best fit for the scene. Making this soundtrack was a little different for Spencer. Typically, she works with her sister and sings. This time, she rarely sang and used many different instruments she had never used before.

“It was a big, improvised, fun jam-out. We found anything that could make noise. We even used spoons,” she said.

Although it was a different experience for Spencer, she had a great time taking part in this event.

“I wish I had more time to do things like this. I love the collaborative effort,” she said.