Bice was runner-up to Carrie Underwood in the 2005 American Idol competition.

When senior theatre arts major DeAnna D’Egidio heard that Bice was playing on campus, she rushed over to the concert from class.

More than 1,200 students attended the lunchtime concert that was held outside, on the E.J. plaza.

“It was a huge success,” said Beth Lynch, press and promotions coordinator for E.J. Thomas Hall. “This is what we hope for. We like to see the students smiling.” 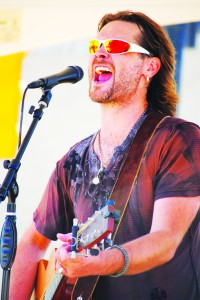 Bice entertained students with songs from his latest album, 3, and seemed to really engage the audience.

“Everyone loved Bo Bice and Bo seemed to love everyone right back,” junior Emily Sherwood said. “His ‘Alabama boy’ charm, down-to-earth nature, and amazing voice were a huge draw.”

Sherwood is the president of the Residence Hall Programming Board. She’s the one in charge of making sure that all of the 9:09, 7:17, and Rock the Roo events go smoothly. She was very pleased with the concert’s success.

Bice’s words of wisdom really seemed to hit home for some students.

“I liked him as a person, and I will remember the things that he said,” freshman Lauren Schirle said.

In an interview following the concert, Bice said, “I don’t ever preach to people or at them. I just lend the testimony of what has been done in my life as an example, and then let people make their own choices.”

Bice said that he is blessed with the opportunity to play music and recalled the advice he gave students at the concert.

“The Lord has blessed me with the opportunity to be out on the road for 20 years now,” Bice said. “It’s the things I mention around that, the things that I grew up on, that have kept me out here this long.”

One word of advice he wanted to give students is to treat people like they want to be treated, but without expecting something in return.

“A lot of people like to treat people the way the want to be treated, but they expect something in return — it’s always hanging there at the end,” Bice said. “Don’t expect it back, because you will end up disappointed in some way. Just love people unconditionally, and be true to them. Give the best of what you got. You are going to get that in return.”

Bice said that he had an experience after the concert that really touched him.

He said that he sat out for few minutes after the performance and talked with a young lady who had attended the concert.

She told Bice that she didn’t know why, but some of the things he said had touched her, and that she wanted him to know before he left that he had inspired her to do something different in her life.

“Those kind of things — I don’t take those lightly,” Bice said. “I told that young lady when she was walking away, ‘You know what? I will never forget  that you came up and said that to me today,’ and I won’t. I mean that wholeheartedly. Because it’s those small things in life.”

Moments like that solidify Bice’s reasons for being a musician.

“When a group of people are standing there giving you admiration and loving you to death and telling you that you are the best,” he said, “man, it feels great. But there is also nothing like one person coming up and saying that you changed their life in some way.”