I rebel, therefore we exist

I have become astounded by the rampant apathy of the vast majority of students on this campus.

You know apathy, right? Or haven’t you ever cared enough to look it up? Well, dictionary.com defines it as “an absence or suppression of passion, emotion, or excitement,” or “a lack of interest in or concern for things that others find moving or exciting.” It sounds a bit harsh, but the majority of us are pretty apathetic.

I’m guilty of it at times. For many of us, if something doesn’t affect us directly, or if it’s not hip to get behind a particular cause, we don’t care all that much. 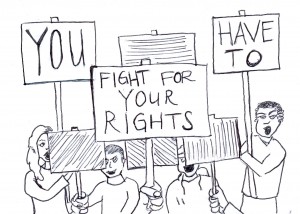 This makes me think of last year’s Kony 2012 movement. Don’t get me wrong, I don’t think we’re entirely to blame. We’ve been lied to and misguided so much — whether by politicians, parents or advisers — that we’ve grown a hard, callous bubble around ourselves. It’s not narcissism or myopic navel-gazing. It’s a sort of defense mechanism: “If I don’t care, it can’t affect me.”

That said, I have to admit to a certain disappointment that on a college campus, of all places, there aren’t many heated debates going on in or outside of the classroom. Isn’t this the ideal time and place to be exercising our convictions and testing our beliefs against those who think in opposition to us?

Why are we so inclined to sit back and preach to our own choirs? OK, that was a rhetorical question. I know why: because our egos get in the way, and because affirmation is safer and more pleasant than having someone contradict us and point out the flaws in our logic.

But that’s not good enough. I’ve seen people set up gruesome photos of aborted fetuses and images likening President Obama to Hitler on enormous screens in front of Bierce Library.

Not once did I hear about anyone challenging these people. I doubt that there are many rational minds on campus, regardless of political views, that would compare Obama to Hitler. So why isn’t anyone speaking up?

I’ve heard about the “Cowboys for Christ,” a small group of men and women who in the recent past have visited campus, clad in cowboy hats and fringed suede jackets, 10-pound belt buckles and gingham blouses.

They roam campus, hand out extremist Christian literature, and call students out — sometimes with a bullhorn — for the way they’re dressed. Students have been called sluts, whores, rapists, homos and more. Only once has anyone stood up to them.

As the story was told to me, a couple of students came down from their dorm with a large cardboard picket sign with the photocopied image of Old Dirty Bastard stapled to it. Above the photo, crudely scrawled in marker, were these words: “O.D.B. DIED FOR YOUR SINS.” This nearly started a fistfight. But that’s about the extent of any shake-up on campus I’ve ever heard of.

Is it that we don’t have anything to rebel against? Albert Camus gives us this: “What is a rebel? A man who says no.” That’s it. Isn’t there anything in our college lives, assuming we’re not paying attention to the rest of the big picture that is our world, to which we want to say no?

How many of us are angry about discrepancies in what we pay for textbooks compared to the pocket change we receive when we return them? Or the fact that the majority of our first-year core classes are taught by adjunct faculty (who are paid the equivalent of $8.33 an hour) or grad students (who are told that their studies are more important than their students)? Or have we been too apathetic to notice?

I’m not saying we need to start another Berkeley, or Columbia, or Kent State, but come on. Oh, and if you don’t recognize those references, you ought to look them up. Student protests aren’t just about pot-smoking hippies fed up with “the man.”

The rebellions at Berkeley and Columbia were not hippie revolts; they were conducted by well-informed, well-educated, well-organized, clean-cut kids from affluent backgrounds. And they risked getting their heads kicked in by the cops. And in the case of Kent State? Well, you should know about that.

Camus also writes, “With rebellion, awareness is born.” You don’t have to look far in world news to see the way rebels are attempting to reshape Asia and elsewhere.

Even here at home, there is the Occupy movement. Parts of the news media have tried to belittle the occupiers’ agenda and make them look like jobless, granola-crunching freeloaders, but that’s not who they are. They have a manifesto online, with a clear message and agenda.

I don’t want to get too far afield, so let me practice a little restraint here. I’m reminded of a quote from Terry Tempest Williams, a brilliant Mormon environmental activist, in a confrontational essay she wrote to challenge the government’s practice of detonating nuclear weapons in the Nevada desert, upwind from where she spent a great deal of her life.

The radiation from those detonations was very likely responsible for the legacy of cancer in her family as well as other families in the surrounding area.

Williams writes, “Restraint is the steel partition between a rational mind and a violent one. I knew rage. It was fire in my belly with nowhere to go.”

What I’m pushing for here is for one of us, any of us, all of us to find that thing we want to stand up and say no to, and to do it: to become advocates of our convictions. Revolt is a principle of existence.

That is to say, as Camus would have us believe, that revolt is one of the “essential dimensions” of mankind. And what are we doing here if not trying to find out who we are and what we want to become?

One last shout from Camus: “To know oneself, one should assert himself.” So here’s my call to action: go! Be assertive!