The sixth-ranked Akron Men’s Soccer team improved their record against
10th-ranked Indiana to 3-0-1 with a 1-0 victory on Friday night in the
Mike Berticelli Memorial Tournament in South Bend, Ind.

With their third straight win against Indiana, the Zips improved their
road record to 31 wins, four losses, and six ties since 2008. 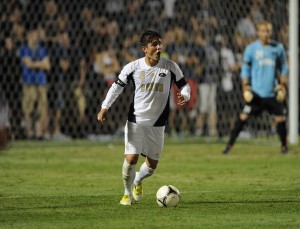 DeAndre gave the Zips their first scoring opportunity when he beat
three defenders and passed to Thomas Schmitt. Schmitt’s shot was
blocked by Indiana goalkeeper Luis Soffner for one of his seven saves
of the night.

The Zips scored minutes later when Dillon Serna shook his defender on
the left flank and fired a cross to Eric Stevenson. Stevenson’s shot
found the net just inside the right post to put the Zips up 1-0 in the
19th minute.

Yedlin nearly put another goal on the board for the Zips in the 41st
minute, but his shot from the top of the box was saved by Soffner.

Indiana’s Eriq Zavaleta tested Meves with a shot in the 54th minute
and another in the 59th. Meves came up with both saves, punching one
above the net and getting down on a low-liner five minutes later.

Akron again had the shot advantage in the match with a 15-11 mark, and
an 8-4 advantage on goal shots. The Zips also led the Hoosiers in
corner kicks 9-7.