The freshest of freshmen are scarcely aware of what course enrollment really means.

Enrolling holds the possibility that behind each seemingly innocuous course description there may lurk an unsuspected monster: a bad teacher. Luckily, I have had the misfortune of encountering such a beast on only two occasions; on the whole, the professors here at UAare outstanding. 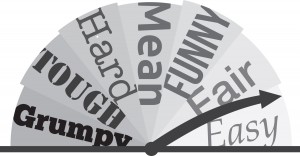 The bright-eyed students who have unwittingly committed themselves to the pain of an incompetent, or worse, arrogant professor will have the sinking feeling that they did not get the product paid for. (I recall a certain one-credit course whose curmudgeonly instructor insulted students and assigned more reading than some of my three-credit courses.)

This feeling of being cheated made me a warier customer in the course market. I would not add a course to my shopping cart until I had consulted the previous customers.

I soon discovered a more convenient avenue, something akin to the customer reviews on Amazon.com or any otheronline marketplace: ratemyprofessors.com. After all, if we are expected to shell out the big bucks for education, I think we at least have the right to be informed and know what we are paying for.

By now we are all familiar with the procedure. Type in the name of the professor and check out his or her scores ­­— in overall quality, helpfulness, clarity, and easiness — and the accompanying comments, or user reviews.

Of course, these ratings are only helpful if they accurately represent those who have taken the courses under review. Unfortunately, the site is somewhat lacking here. The most reviews for any single professor is only 108, a far cry from the actual number of students this professor has taught.

The average number is somewhere between six and 20 reviews.

Clearly, the website attracts far more viewers than it does contributors. Moreover, as is often the case with product reviews, the few that actually do chime in are often outliers, either the fiercely disgruntled or the enthusiastically pleased, thereby skewing the average score.

It is hard to take seriously the capitalized rants of those who, because they received an F and had their egos bruised, hold an everlasting grudge. The same is true of the gushing praise given by delighted A students, or by impressionable girls smitten with their dreamy physics professors, as registered by assigning a “chili pepper,” signifying hotness.

It is no surprise that seven of the top 10 professors possess this distinguished honor. In no way do I mean to downplay the chili pepper; on the contrary, an attractive teacher ­— and I have had a couple of stone-cold foxes — can significantly enhance the learning experience by demanding one’s unswerving attention.

As for their being a distraction, I can only say that such welcome diversions are hardly worth decrying.

Considering that the average easiness score of the top 10 is 4.06 out of 5, it would seem that the top-ranked professors are merely those who, in addition to being hunks and vixens, are those whose courses are easy. Alas, it is not so: the easiness score is not included in the overall score (and nor are chili peppers).

The qualities not covered by “helpfulness” and “clarity”— such as knowledgeability, personality and all-important humor — are included in the comments section; and it is not surprising that the best professors consistently rank among the most approachable and humorous.

Despite its flaws, ratemyprofessors.com is one of the few professor evaluations available to students. One would like to see something of the sort filled out at the end of each semester, although I am not certain that students would give them any more thought than they already give the evaluations prepared for department heads.

(This is lamentable; the comments section, so often ignored, partly determines the livelihood of professors.)

Nonetheless, such evaluations passed among the student body would at least keep the students informed and the professors on their toes. As for now, we can only trust the rumor mill and the flawed albeit helpful reviews on ratemyprofessors.com. Happy hunting, and buyer beware.