Being shy has its perks. You have that mysterious aura about you that makes others interested, intimidated or nervous. When paired with confidence, however, shyness can be an amazingly powerful tool. 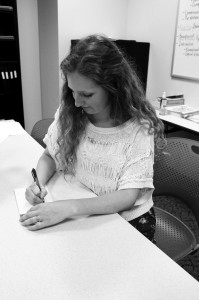 Passivity has been haunting the human race since the dawn of time, and we have suffered from it. You may think that we’ve suffered for a good cause, or that it’s better to stay silent than to be rejected, but you’re not the only one who feels the pain of being passive. Women want to be wanted — they want to feel that they’re worth something to someone. They want someone who is actually willing to step up and fight for her heart, rather than leaving her to fight for it herself. We crave attention, and some girls will do anything to get it.

When you focus on the positives in yourself instead of the negatives, your confidence will grow, and when it does, you need to put it to good use. Rejection sucks, but victory over fears is sweet. Use your shy-guy skills to catch the eye, and then surprise her with talking to her first and being straightforward with your intentions. Some women like to play “the game,” but others really suffer from over-thinking things that weren’t said in the first place. Trust me, a lot of unintentional fighting and crying can be avoided if you’re simply candid about what you’re thinking and what you want.