Each fall semester brings with it a new herd of freshmen. The telltale signs of “fresh meat” are apparent all over campus. It is sentimental to think back to your first day on campus. For some it was many years ago. The winds of time have aged these upperclassmen and made them wise and knowledge filled on the ways of the land. 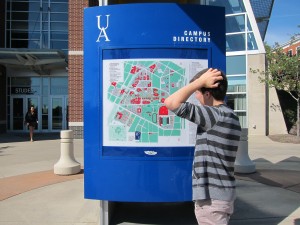 For others, it was just a short time ago that they first stepped onto campus, still a long way to go before they could run the plains free of fear of becoming lost.

The freshmen can first be spotted in packs walking the guided tours, following behind orientation leaders who feel somehow entitled because they are “involved” volunteers. Most are embarrassed, still too fresh out of high school to not feel hindered by their parents, who are close at their heels, not quite ready to let their babies go off into the wild.

When the first week of classes commences, there are clear red flags signifying the fledglings that have just left the nest. The first and most unmistakable sign is the schedule. The building names are still so foreign to the young ones that they will be quickly forgotten. The freshmen stand looking quizzically about, schedule in hand, lost in the big world for the first time.

Freshmen tend to travel in packs for quite some time, not yet confident enough to run on their own. Their overstuffed backpacks are filled with anything and everything they could possibly need, down to a ruler and an emergency flare gun in case of peril.

They wear their lanyards securely around their necks, sporting their Zip Cards and signifying their pride in being a resident and their excitement to eat whatever they want on campus. Rob’s is great to this lot.

At their tender age, food with actual sustenance seems silly. They can eat Pop Tarts and Ramen noodles all they want. It’s suddenly cool to wait in line for 20 minutes to spend $6 on a blended sweet drink with no actual coffee taste.

Female freshmen are always dressed to the nines. Their flashy apparel may be a way of attracting a mate. In most cases, curled hair, dresses and a full face of makeup only attract frat boys. It’s usually a sign of a lost soul without a major, looking for a way home.

They can be seen running to class when late. This sense of urgency hasn’t given way to laziness, or to the desire to actually be outside on a nice day. Every recommended textbook is purchased before the first day, and chapter one has already been read, and probably highlighted.

After the first week, stories run rampant about the “crazy” parties over the weekend. The freshmen’s first college parties bring shame to many, and perceived glory to others. “I got so drunk!” “I made out with a junior!” The exclamations of drunken escapades go on and on.

With only the easy “syllabus week” under their belts, the long nights of studying and paper-writing seem like a myth high school teachers told kids to scare them.

Be aware of these signs. Freshmen, take heed. Avoid these weaknesses so you do not fall
prey to ridicule. When I was a freshman, I didn’t understand why these faux pas even mattered.

So what if I have to look at my schedule?

But now, as an upperclassman, I know that stereotypes are hard to break. These habits alert others that you are vulnerable and that you usually have no idea what is going on. Get a clue, young ones.