Residents and commuters alike gathered outside on the E.J. Thomas Hall plaza to enjoy Val’s soulful and smooth rhythmic style. Val, who has opened for groups such as Maroon 5, LMFAO and Pitbull, performed his songs in English, but also paid homage to his Peruvian roots by playing two songs in Spanish. 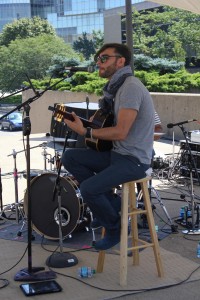 Val, who is currently collaborating with the Black Eyed Peas, said he chooses to be spontaneous with his playlist when he performs.

“I make my playlist on the spot. It has a lot to do with the crowd, the sound system, the day, the weather… I really just go with however the crowd is reacting,” Val said. “If I see people leaving, I start doing uptempo songs!”

Val began playing the guitar when he was 13 years old.

“I was very sick from age nine to 13. I wasn’t able to do much, because of my illness, so my grandma gave me my first guitar at age 13,” Val said. “We didn’t have the Internet back in Peru at the time, so my way of learning was by watching MTV videos, and that’s how I started learning chords.”

Val cherishes the concept of family. He said his mother is his biggest support system and the reason he came to America. She attended his performance Wednesday afternoon.

“She’s believed in me, and she always told me to follow my dreams. She’s also been my financial adviser throughout all these years,” Val said. “The love and support of a family member can do so much for a person, and she definitely made me stronger in my beliefs and pushed me.”

Val, the runner-up in American Idol Latin America, writes his own lyrics and poetry. He sums up his inspiration for his material in one word: life.

“I find my inspiration in just living, traveling, reading, and learning about people,” he said.

Diego Val performs more than 250 shows a year. He says that people of all ages have come to his shows, and that he finds true fulfillment in being able to perform for and sing to the world.

“It makes me so happy, knowing that people are just watching and listening to me and enjoying it,” Val said.

Recently announced as a contestant on reality talent show “The Voice,” Val said that he is very enthusiastic and excited for the experience.

“There’s so much talent in this competition. It’s the best of the best in America,” Val said. “I believe it’s definitely the best season so far.”

Val got the audition call just as he was leaving for Peru to record a soap opera. He decided to try out for the show, and since then has been recording for the new season.

“Really, it’s a show that I’ve enjoyed more than American Idol, because it’s true,” Val said. “They don’t care about someone’s age or their looks; it’s more about your vocals. If it’s all about looks, it’s not really real for me.”

To learn or hear more from Diego Val, check out his YouTube channel at youtube.com/user/theofficialdiegoval, or look for him next week on “The Voice.”