Anyone who has ever been thunderously reproved for using “who” instead of “whom,” or (more unforgivably) “there” instead of “their,” has felt the chastising hand of the Grammar Nazi, the proud and paranoiac preserver of the English language whose fanatical ravings about the “purity” of English are mostly crystalline nonsense.

As every proper linguist knows, language evolves, and this change is the unfailing symptom of linguistic health and vigor. But this does not mean our lexicon is immune to occasional deformities and unsightly blemishes.

Consider the word “like,” which is used liberally to introduce any sort of expression, verbal or nonverbal, as in, “I was like, ‘Really? That’s ridiculous,’” or “I was like,” followed by an incredulous raise of the eyebrows. 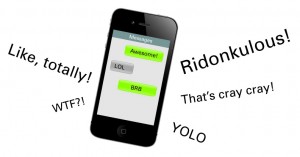 The problem with “like” is not the handy word itself but our overreliance upon it, to the neglect of useful words which gather dust like unused tools while their proprietor pounds away with the same old hammer. People do not only “like” or “go,” they also say and mutter and shout and whisper and exclaim and—did I mention say?

Also consider the curious fondness for the word “ridiculous.” It need not describe something deserving of ridicule (which is the original sense of “ridiculous”), but is used in the way we often use “crazy,” as in “that’s crazy.” “Crazy” also need not designate something that is, in any sense, mad or insane, but merely remarkable, extraordinary, interesting, surprising, or incredible. Blame our fondness for catchall terms—or rather our laziness.

This love affair has spawned some amusing bastardizations: “ridonkulous,” “ridonkerous,” and “ridiculousauce,” to name a few. Ridiculosities (my contribution) abound on MTV’s new show Ridiculousness, which shows web videos of ridiculous people doing ridiculous, or I daresay ridonkadonk, things.

Words like “ridonkulous” supply that oomph which wimpy words like “ridiculous” lack. This dissatisfaction with workaday words results in super-words like “ginormous,” used in dire situations where “gigantic” and “enormous” just won’t cut it.

Our impatience with the merely superlative and exciting has led to the pulse-pounding multiple exclamation marks which hyper-punctuate the most mundane Twitter and Facebook posts: “Made an awesome turkey sandwich today!!!!!!” The exclamatory power of the exclamation mark has been so diminished by overuse that we must hysterically string together mark after mark to elicit more than a yawn.

“Awesome,” as used in the aforementioned example, used to be a word which, like “awful,” was only used to describe that which truly inspired awe, as in, say, God or something.

This is a pedantic quibble, yet there is something to be said about the breezy use of awesome and amazing and crazy and ridiculous to describe what is frequently neither awesome, nor amazing, nor crazy, nor even ridiculous. It makes for unimaginative and boring speech—of which I am as guilty as anyone else—and even worse writing.

We need to restock and expand our adjectival arsenal. If something is merely noteworthy, let it be called such. If greater than ordinary, then extraordinary. Then, in the face of the truly awesome and amazing, we may exclaim it with one exclamation mark, mind you—to the heavens and awe the wonder wounded hearers with our aptness (and with such bombastic phrases).

When we are inclined to cuss, let us reserve those potent four-letter bombs for the most opportune moment, when no pedestrian phonemes avail, and then spit them like cannonballs.

It is time we become attuned to the nuance and subtlety of a surprising turn of phrase, to the multicolored and multi flavored expressiveness of each adjective and adverb, sprinkled discriminately like seasoning, if only to add zest to our conversations.