Celebrating Diversity at The University of Akron

The fall 2012 enrollment at The University of Akron includes students of Native American, Hispanic, Asian and other ethnic groups. There are also many religious groups on campus, as well as ones that represent different sexual orientations. These differences in the student population create diversity across campus.

Diversity Week brings every type of student and organization together for a week full of learning opportunities. It runs from Sept. 17 through Sept. 21 and features a variety of different programs.

Lorri March, coordinator of the Department of Student Life, explained why there is such a wide selection of focuses during this week. 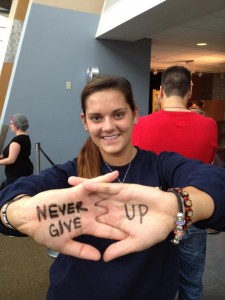 “Diversity isn’t just the color of someone’s skin,” March said. “It has a lot to do with visible and invisible differences, as well as people’s backgrounds, history and culture.”

The events on Monday included the Focus on Diversity table sponsored by the Office of Inclusion and Equity and the Women’s Resource Center.

Other events on Monday included “Constitutional Issues in Same-Sex Marriage,” presented by law professor Wilson Huhn, as well as “Learn About the Role of Military Culture in Everyday Interactions,” sponsored by the School of Social Work.

One of the most popular events on Tuesday was Robert Fogarty’s Dear World Akron, sponsored by the Department of Student Life and the Undergraduate Student Government. Fogarty had an open photo shoot of students who had written on their hands and arms what they wished they could tell the world.

Another key event was a set from Hispanic comedian Cristela Alonzo.

“In her act, she talks a lot about growing up Hispanic, and even though it’s meant to be funny, you learn quite a bit about her culture,” said Carly Corio, a member of the Residence Hall Program Board.

Also on Tuesday was the Focus on Diversity table; a movie screening of “A Day without a Mexican;” “Race Matters,” presented by Erica Merritt, associate director of Leadership and Inclusion Initiatives at the Greater Cleveland YWCA; “Civil Rights and the Constitution,” presented by law professor Wilson Huhn; and “Health Disparities: Why Should it Matter to Me?”

On Wednesday was another photo shoot for Dear World Akron, which gave students an additional chance to get their messages out.

Wednesday also included the Diversity Involvement Fair, sponsored by SOuRCe; “The Impact of Films on One’s Perception of Diversity,” sponsored by the School of Social Work; and “Puerto Rican/Latino Youth, Citizenship and the New American Militarism,” presented by Dr. Gina Perez.

Thursday’s main event will be speaker Jessica Pettit’s segment “Social Justice: When Diversity Isn’t Enough,” and will take place in the Student Union Theater from 9:30 a.m. to noon and Leigh Hall 107 from 5 p.m. to 9 p.m.

LGBTU is sponsoring many events this year, including “Sticks and Stones: LGBT 101,” which is co-sponsored by Liberation in Progress, Women’s Resource Center, and the STEM Initiatives. LGBTU is also sponsoring showings of “Fish out of Water” and “You Should Meet My Gay Son” during the week.

President Chris Kuhn says that this is because they want to raise awareness through visibility.

Member Devaun Tyler said, “We experienced an explosion of membership, and we want to have ways to keep them engaged on campus.”

LGBTU is also sponsoring the Star Activity in Student Union 316 on Friday from 4 p.m. to 6 p.m. LGBTU says this program represents the struggle of the coming-out process.

Another event sure to perk interests is “A Taste of the Middle East” from 11 a.m. to 1 p.m. in Student Union 335 and sponsored by HeebRoos: Hillel at The University of Akron.

“This is an opportunity for you to come and be able to taste foods from the Middle East without having to pay for it,” March said. “The hope is that it might open up your cultural pallet to something different.”

There will also be many other events across campus to finish off the week. For a full schedule, students can visit The University of Akron Student Life page at uakron.edu. These events are sponsored by a number of different groups, including RHPB, Off-Campus Student Services, ZPN, the School of Law, and Undergraduate Student Government.

Although this week is special for The University of Akron, March said, “We celebrate diversity every day on campus. It happens in the majority of programs we have and in many things that we do.”