No matter how tough life is, if people remind themselves how blessed they are, they can handle anything. 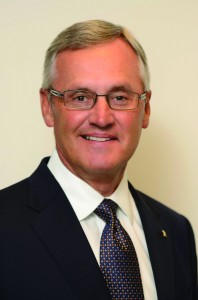 That was the central message of Jim Tressel’s lecture on Monday night. Tressel, vice president for strategic engagement, presented “The Journey of Success” at E.J. Thomas Hall.

According to Tressel, this was his 100th appearance at The University of Akron since taking the job last spring. Therefore, he decided that this speech would be unlike any of the others that he had given in the past.

“Life is about defining what success means to you,” Tressel said.

He went on to say that to him personally, success is finding a way for all of us to get along.

“There is unity in diversity, and all of us are influenced by what we read, listen to, and surround ourselves with,” he said.

This led to the main portion of the presentation, which Tressel titled “Books, Songs and UAkron.”

Tressel dove into his recent read of “The Traveler’s Gift” by Andy Andrews. This is the story of a man who travels through time and meets famous historical figures who teach him life lessons. Two exceptional teachings Andrews described in the book, according to Tressel, were Anne Frank’s quote, “Today I will choose to be happy,” and Abraham Lincoln’s quote, “I will greet this day with a forgiving spirit.”

In the next section, Tressel played “Tough” by Craig Morgan. He then leapt into the topic, “Do we really know what tough is?” and conveyed the idea that toughness is doing the things expressed in “The Traveler’s Gift” every day.

In closing, Jim Tressel addressed the topic of whom we surround ourselves with.

“We all think we have tough journeys, but usually when we’re around the right people we find that some folks have harder journeys, but continue to persist,” Tressel said.

He believes that this type of inspiration can be found everywhere at The University of Akron.

This event was sponsored by the Honors College and was the first speech of the John R. and Sarah A. Adams Honors College Speaker Series. His speech is also one of four non-subscription lectures in the Forum Series at E.J. Thomas Hall.