A communications class was intrigued when an Olympic athlete stopped by to talk to their class last Tuesday.

Nick Symmonds, a professional track athlete and participant in the 2012 Olympics, talked to a public relations strategies class about his experiences in track and with the media. Symmonds has become known not only for his medals but also for his media stunts, which have earned him the nickname “the bad boy of track and field.” 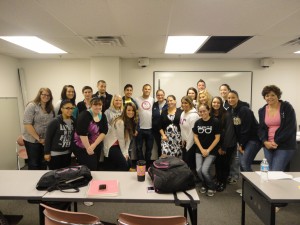 Because the lecture occurred in a PR strategies class, much of the class focused on Symmonds’s publicity and work with the media, including how he got a publicist six months ago.

“With Nike, I knew that my contract would be up at the end of the year and I wanted to continue to run and train for 2016,” Symmonds said. “I had to try and make my brand as big and desirable as possible, so that Nike would want to re-sign me.”

To do this, he had to make sure that he not only ran well, but did everything in his power to give them a good return on their investment off the field as well.

“Part of that was getting a publicist,” he said.

Hal Lifson from Beverly Hills, who has clients ranging from athletes to musicians, contacted him and they made a deal.

“He thinks outside of the box, which, when you are trying to market a track and field athlete, is what you need,” Symmonds said.

One idea that Lifson had was for Symmonds to ask Paris Hilton out on a date. Lifson, who is friends with the Hiltons, came up with the idea that Symmonds would ask Rick Hilton, Paris Hilton’s father, if he could take his daughter on a date.

“Given the fact that I’m from Boise (Idaho) and grew up in a Catholic school, going back to this old-fashioned approach of asking Rick Hilton for his daughter’s number gained a lot of national attention,” Symmonds said.

What gained even more national attention was when she said yes and they went out for drinks in Beverly Hills.

“(Track and field) can be a platform to do all kinds of incredible things: from traveling the world, to competing in 30 different countries, to going on dates with celebrities, to getting a little drunk once in a while,” Symmonds said.

Symmonds was referring to the Beer Mile he ran. The Beer Mile is a drinking game where a runner races four laps around a quarter-mile track, drinking a can of beer before beginning each lap.

“I like to do controversial things, because track and field can be a bit boring, just the way it’s been marketed before,” Symmonds said.

He said that he does run everything by Nike, his chief sponsor, before doing it.

“Some of these things Nike likes. Some of the things Nike doesn’t like,” Symmonds said. “This is an example of something Nike wasn’t super-stoked about.”

Although Nike didn’t like the Beer Mile, many others did.

“Since doing this, I have been offered numerous speaking engagements at beer fests,” he said.

For the 2012 Olympic season, Symmonds auctioned off space on his left shoulder on eBay. The winner of the auction would have their Twitter handle temporarily tattooed on his arm during the 2012 track season, as well as the 2012 Olympics.

Symmonds said that the scary part of this was that he didn’t know what kinds of people or businesses would be bidding for the space.

“During the auction, I think there were 118 unique bidders,” he said. “I didn’t know what they all necessarily represented, but I’m sure there were some interesting ones out there.”

Ultimately, Hanson Dodge Creative, an advertising and design agency, won with an $11,100 bid.

Symmonds said that he had planned on auctioning off his right shoulder later on, but after working with Hanson Dodge, he changed his mind.

“After working with Hanson Dodge Creative and just seeing how amazing this company was, I didn’t want to dilute their investment any by adding another sponsor,” Symmonds said. “So I said, hey, I know we don’t have an exclusivity clause in our contract, but I’m going to give you exclusivity, because I appreciate everything you’ve done for me.”

Symmonds said that his relationship with Hanson Dodge has grown to the point that he talks to them two or three times a week.

Because of Rule 40 in the Olympics, though, Symmonds had to tape over his tattoo during the games.

Rule 40 prevents athletes from appearing in advertisements for, or personally advertising, businesses other than the official sponsors of the 2012 Olympics. During the games, athletes could only wear sponsor logos on their uniforms and were not allowed to post on social media about their sponsors. This rule was in effect not only during the Olympics, but shortly before. Symmonds said he was very much against the rule.

“It’s taking an athlete’s ability to make a living and market themselves, and just completely stomping on it,” he said.

Symmonds found a clever way to get around the rule. While visiting a Nike Hospitality Space, he noticed a shrub in the shape of a Nike shoe, complete with the famous swoosh. He posted a picture of the shrub to Twitter with a caption.

“I said, ‘I’m at my favorite sponsor’s Hospitality Space. I can’t mention who it is, because I don’t want to violate Rule 40. Oh, and by the way, how cool is this shrub?’ In no way did I ever mention Nike.”

While Symmonds does have the image of being “the bad boy of track and field,” he tries to balance it with community service.

“On the one hand, I want to be outspoken, and the bad boy, but that’s kind of trite. That’s been done. So I balance that with a lot of community service,” Symmonds said. “So now I’m that bad boy that does nice things once in a while.”

Symmonds’s community service includes work with Big Brothers Big Sisters, and auctioning off a pair of shoes that he wore in the 2008 trials for a charity called Smile Train, which works to provide surgery for children with cleft palates in Third World countries.

“That’s the way I like to view this business: as taking something, but giving back as well,” Symmonds said. “If I can inspire somebody, or give back along the way, it makes it all worth it in the end.”

As for work besides running track and his community service, Symmonds bought into a tanning franchise. One thing he doesn’t like about being an athlete is that he is one injury away from losing his career. He said that he needed to ensure that he would still have some source of income, in the event that something happens to him.

Symmonds was a biochemistry major in college, and said that if he had continued on that path, he would have been a fourth-generation surgeon. He decided to put off school for two years in order to train for the 2008 Olympics, and when he was offered a contract by Nike, he decided to continue training.

While biochemistry doesn’t help much in running track or in running a tanning business, it did teach him to be persistent.

“I think the key to success in anything is just persistence, because you will always come up against obstacles, which stop a lot of people in their tracks,” Symmonds said. “But if you’re persistent, there is a way to figure out every single problem.”