A lefty in a righty’s world

Oh, the woes of growing up left-handed. I can still remember having to use those special left-handed scissors. The plastic blades you squeezed together couldn’t cut anything, therefore compromising every art project.

When learning how to write, there is that awful issue of accidentally dragging your hand across the lead, which results in smeared homework and a gray hand. 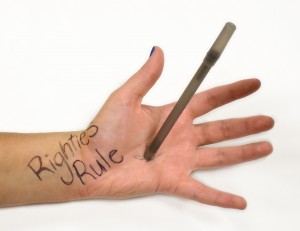 Trying to learn how to play sports is just as difficult. Everyone else seems to be right-handed, leaving the lefty as the odd one who has to do everything opposite. Some say this may give you an advantage, shake up the opposition. But when you are in second grade, trying to learn wiffle ball, it can get confusing.

The world can be a lonely place for a lefty. Going out to dinner can turn into an awkward dance of maneuvering elbows if seated next to a righty. A day in class can be just as frustrating, trying to keep your left-handed writing out of your neighbor’s personal space.

Left-handedness has long been looked down upon. According to Molly Kalafut, a research writer, Catholic schools used to force left-handed writers to use their right hands.

In India, the left hand is reserved exclusively for wiping your you-know-what after using the restroom. Eating, picking things up, or shaking hands with your left hand is considered disgusting and rude. This is practiced in many parts of the Middle East and in most of Asia.

Also, according to Kalafut, lefties are six times more likely than righties to die in an accident, and four times more likely to die while driving. They are more susceptible to allergies, autoimmune diseases, drug abuse, bedwetting, sleeping disorders and depression, and the list goes on.

No one seems to like the lefties. All over the world, the word “left” itself is put down. The word “left” comes from an Old English word meaning “weak” or “worthless.” “No ser zurdo” is a Spanish phrase meaning “to be very clever, which literally means “not to be left-handed.”

With so many odds stacked against lefties, how do they go on? Left-handed people make up only 10 percent of the American population. Lefties are a rare breed, like redheads and albinos. We are unique in our own way, and should be celebrated for our special talents.

When seeing a list like this, one could argue that being left-handed is a positive, not a negative. According to James T. DeKay and Sandy Huffaker, from “The World’s Greatest Left-Handers,” “Left-handers are wired into the artistic half of the brain, which makes them imaginative, creative, surprising, witty, delightful, original, but never, never, dull.”

So, lefties, don’t feel alone or discouraged when that craft project doesn’t come out the way you hoped or when you get something backwards.  You are special.