Rarely, if ever, can a team take consolation in a loss.

Saturday may have been the exception for the Zips, as they went stride-for-stride with the Tennessee Volunteers until the middle of the fourth quarter.

The 47-26 loss, at Neyland Stadium in Knoxville, was hardly a blowout. The two teams were tied at 23 at half; it did not turn into a two-possession game until 9:02 remained in the game. 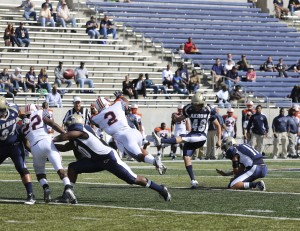 “We punched when they punched,” said head coach Terry Bowden.

For a team that has struggled so mightily over the last two seasons, keeping up with a team from the most powerful conference in the country was a victory in its own. Favored by 35 points, the Volunteers clearly were not expecting a tight ballgame.

Of a 102,445-seat stadium that’s usually packed, 81,719 fans showed up. Zips fans witnessed a game much like they plan to see this week against No. 5 Georgia.

“I’m awful proud of our players for not being willing to accept the fact that they were supposed to lose,” Bowden said.

The Zips were off to a fast start as cornerback Avis Commack returned a wildly thrown ball by Tennessee quarterback Tyler Bray 44 yards for the score. Bray was heavily pressured. Commack jumped the route and the Zips led 7-0 with 35 seconds into the game.

Tennessee responded on their next drive with 13 plays, 75 yards and, most importantly, a two-yard touchdown run by A.J. Johnson to lock it up at 7-7.

A field goal by both teams closed out the first quarter at 10-10, highlighted by Akron’s Robert Stein hitting a career-long 44-yarder. Stein had a busy night, connecting on 4 of 4 field goals, including two in the second quarter.

Down 20-16 with just 2:14 left in the first half, Akron got a big play from running back Quentin Hines. On the first play of the possession, the senior took a handoff, busted through the line, and outran the Tennessee defense 70 yards for a touchdown.

The lead did not stick for long, as the Volunteers rallied for another field goal to tie the game going into the half.

“Both teams made a couple of mistake early, but I think they about evened out,” Bowden said.

The barrage of scores in the first half was followed by a one-score third quarter.

With 6:47 remaining in the quarter, Tennessee running back Robert Neal took a pass from Bray into the end zone from three yards out.

Ahead 30-23, the Volunteers held the lead for the rest of the evening.

Another Stein field goal ten seconds into the fourth quarter pulled the Zips to within four, but the Volunteers’ passing game proved to be too much down the stretch.

Midway through the final quarter, Bray connected for touchdown passes of 19 and 24 yards, allowing his team their first comfortable lead of the game.

“They just had too many weapons for us,” Bowden said.

Zips quarterback Dalton Williams finished 27-of-49 for 229 yards and three interceptions. Twelve of those completions were to Marquelo Suel, who finished with 92 yards receiving.

Hines led the running game with 76 yards on six attempts, followed by Jawon Chisholm, who carried the ball 14 times for 53 yards.

Akron will enter conference play this Saturday, when they host Miami (Ohio, 2-2) at InfoCision Stadium. Kickoff is set for 2 p.m.