With the upcoming election, we are up to our knees in U.S. politics, but now many university students are in neck-deep as on-campus politics are poured into the vat.

This past month at The University of Akron, the Lesbian, Gay, Bisexual and Transgender Union (LGBTU) has been duking it out with the senate members of the Undergraduate Student Government (USG). It’s not really surprising; civil rights is one of the most heated topics in our nation right now, so to have it hit us at home is completely understandable. 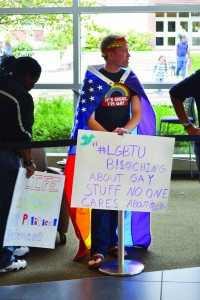 What isn’t completely understandable is why an elected official at UA refuses to give a hearing to the LGBTU, when it is his job to represent and listen to all students at the university.

Nor can I comprehend why the senator had to top off this homophobic sundae with offensive comments towards the LGBTU. Sure, everyone is entitled to their opinion, but it was strictly unprofessional for a member of the USG — that is, a representative of the student body — to not even lend an ear to such a large student organization, simply because of a difference of opinion.

And it was even more unprofessional, and immature, for the senator to tweet rude comments about the LGBTU after their president pleaded to the USG senate for the removal of Chick-fil-A sandwiches from campus. This apparently isn’t the first time the senator has tweeted offensive things about groups on campus.

Tweeting? Really? Pardon me while I slam my palm onto my face.

I may not be involved in the politics here, but it is my understanding that the USG is supposed to represent all Akron students fairly. Whether it’s getting rid of Chick-fil-A sandwiches or improving the quality of the toilets on the second floor of Crouse Hall, it is the job of the USG senate to listen to, respect, and appropriately deal with the issues presented to them.

The USG has been very good at this, but they have a rotten apple in the bunch. And what do you do with rotten apples? You toss them out, or else they stink up the whole bushel.
Senator Nagy refused to do his job. He refused to listen, and he rejected the plea of the LGBTU without giving them a chance to explain their reasons. This isn’t an issue of civil rights, necessarily, but simply an issue with someone who won’t do their job efficiently.

This is what brought the protest to the campus on Oct. 1. According to Chris Kuhn, the president of LGBTU — who was the one who approached the USG senate with the plea to remove the sandwiches — the purpose of the protest wasn’t simply to rail against Chick-fil-A, but to remove a senator from office who unjustly treated the group Kuhn represents.

“This isn’t specifically a matter of removing Chick-fil-A from campus anymore,” Kuhn said. “What we are protesting today is the fact that the USG senate didn’t give us a fair chance. We voiced our argument and were faced with disrespect. Our goal today is to simply make the USG senate see that they erred in the decision to not give us a hearing.”

In the well-thought-out, intelligible words of our USG senator: “lol it’s just a sandwich.” Well, sure, you can say that. But I challenge you to be able to not think about the protest as you dig into the tender white meat chicken in that beautiful heart attack of a sandwich. Lol, you kind of got yourself into this mess.

It’s not just a sandwich. This has evolved into an issue of intolerance on the part of the USG senate. I’d like to see our senate be open to all opinions and
issues. That would be nice.