The Lesbian Gay Bi-sexual Transgender Union student organization at Akron stood their ground on Monday as they protested the Undergraduate Student Government for recent conflict between the groups.

The conflict started when Josh Nagy, current student senator for the USG, allegedly posted a tweet regarding the LGBTU’s stance against Chick-fil-A after the senate meeting on Sept. 13. 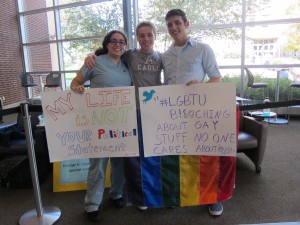 “If seeing a certain brand of food causes you to drop out of school you have bigger issues,” Nagy said in his tweet. “#lgbtu we like to bitch about gay stuff that no one cares about.”

The third tweet was a picture of a Chick-fil-A bag underneath the gay games bracelet.

Nagy was referencing the fact that some members of LGBTU do not feel supported by the fact that The University of Akron is still selling Chick-fil-A sandwiches.

“A student organization came to USG Senate with a legitimate concern that I responded to inappropriately. I shut LGBTU out in engaging conversation by tweeting “#LGBTU, we bitch about gay stuff that no one cares about,” he said.

“This was wrong for me to say as not only a senator, but as a person. In order to rectify I’m currently attempting to extend a hand to LGBTU to let them know we do care about their wants and needs for campus,” Nagy said. “LGBTU has every right to deny me this opportunity as I did them but I will make it my primary objective to prove to them I am honest and sincere and that I truly do have their interests at heart.  It will be a long road ahead and actions speak louder than words, and so I hope that my actions can lead to justice in an unjust situation.”

Chick-fil-A was the center of some controversy this summer when the president of Chick-fil-A, Dan Cathy, made a statement that he did not support gay marriage. This statement caused many outbreaks of opinion from gay and straight communities, and resulted in some protesting Chick-fil-A stores.

Barbicas said that when prospective students visit the campus and see that Chick-fil-A is being sold here it might detour them away.

“We don’t want to see Chick-fil-A not being sold on campus, we want people to stop buying it,” Barbicas said.

The actions of the USG have lead many members of the LGBTU group to say that the USG does not support the group. Barbicus said that USG allows hate speech.

“These students are put in and paid for this position to support all groups on campus,” he said.

Kacie Herron, the director of campus life for USG, was also previously an officer of LGBTU.

“The senate has done great things,” she said. “We support any student group and we take this situation very seriously.”

USG President Mary Beth Clemons spoke on behalf of the USG as a whole.

“I strongly believe that everyone is deeply sorry for the injustice that has been done to one of our student organizations, specifically LGBTU,” she said. “In short, LGBTU came to our organization to voice a concern and we failed to give it the respect or recognition it deserved.”

She continued by saying that the actions from the senator were inexcusable and it left LGBTU feeling even more slighted.

“As an entire organization, we take full responsibility for the wrong that has been committed. As members of an organization that prides itself on advocating for the voice of our peers, we apologize for failing to represent that voice,” Clemons said.

Clemons said that she hopes this experience will help the USG grow stronger in their ability to represent students campus wide.

“Members of our organization have been in close contact with the leadership of LGBTU so that we can help them to gain the attention and respect that their voice deserves, especially since we denied that to them when they first approached our organization,” said Clemons.

Clemons added that it would take time for students to trust their organization again, but they encourage students to motivate USG to represent students to the best of their ability.

“Please let this be an important lesson, not simply for USG, but for us all to realize the importance of recognizing and respecting the views and concerns of our fellow peers,” she said.