In a dominating and exciting win Saturday night, the No. 7 Akron men’s soccer team improved to 6-1-2 (2-0-0 MAC) over conference foe Buffalo.

Reinaldo Brenes, who helped Akron post the 4-0 victory, scored the first hat-trick for the team this season, and the first of his career. 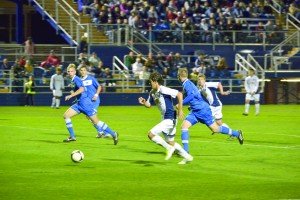 In 32 previous games in a Zip uniform, the junior has only recorded one goal.

“It is good to contribute to the team, finally,” he said after the game.

The Zips recorded their fourth shutout in a row fairly easily.

Senior goalkeeper David Meves did not have a chance for a save the entire game, as the Bulls (2-8-1, 0-1-0 MAC) did not record a single shot on goal.

“What I am most pleased with tonight is our progress,” said head coach Caleb Porter. “We had two weeks and two games to get better.”  After dropping a match to Notre Dame on Sept. 9, the Zips have not allowed a goal.  Akron dominated the shot column 28-2, and recorded 12-0 shots on goal. The shutout was number 44 for Meve’s career.

Brenes found the goal early and often in the first half of play. He flicked in a header from Aodhan Quinn with a corner kick in the 12th minute to put the Zips up 1-0.

Twelve minutes later, Brenes beat the goalkeeper from close range with a sliding shot for his second goal of the game.

In the 38th minute, Brenes finished off the hat-trick with a pass from Eric Stevenson.

Scott Caldwell scored the final point in the 88th minute with a penalty kick, after DeAndre Yedlin was taken down in the penalty box. It was Caldwell’s team-leading sixth goal of the season.

After the game, Porter spoke highly of the Zips’ defensive performance.

“I thought this was the most dominating defensive performance we’ve had all year,” he said.

The Zips will continue conference action tomorrow at FirstEnergy Stadium-Cub Cadet Field at 7:30 p.m., where they will take on Florida Atlantic.