Tressel inspires at UA and beyond

As vice president for strategic engagement, Jim Tressel wanted his motivational messages to reach not only students at The University of Akron but beyond. 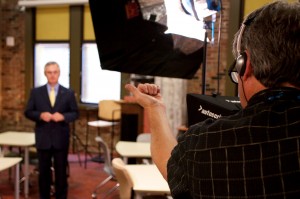 UA spokeswoman Eileen Korey said WKYC approached Tressel and the university because they were impressed with the inspirational messages in his book, “The Winners Manual for the Game of Life.” Their goal was to give Tressel a broad audience for his positive messages.

“We want the world to know the kinds of positive, inspirational stories that are here, partly because this is what Jim is doing here,” Korey said. “His goal is to advance student success.”

It was very important for Tressel to make sure that The University of Akron was a part of his weekly segment with WKYC.

“My primary hope is that someone, at some point, needs to hear that message, and that it will make a difference for them,” Tressel said.

WKYC interim news director Virgil Dominic said that when he sees Tressel interact with students, he sees a man who knows how to connect with people.

“We are extremely fortunate to have Jim as part of the Channel 3 team,” Dominic said.

Dominic said that Tressel has always been a hero of his.

“Jim has had a very unique kind of experience,” Dominic said. “He was at the height of fame and suffered ridicule. He not only survived it, but conquered it.”

Dominic said that Tressel has a lot he can teach his viewers.

“People are glued to his messages because they tap into your heart and soul,” Dominic said. “We hope to add something very interesting to the market. No other station has Jim Tressel. It provides moments that will have the potential for inspiration. It will serve as an example that there are a lot of good things happening in our world.”

The first few segments of “A Moment with Tressel” will be shot in The Polsky Building. Viewers can catch his segment every Wednesday, during Channel 3’s 7 p.m. broadcast.