The Seattle Space Needle is getting a makeover this October — and the artist giving it a makeover may be a University of Akron student.

The Space Needle was built for the 1962 World’s Fair, and has been a technological marvel and an important symbol for Seattle ever since. 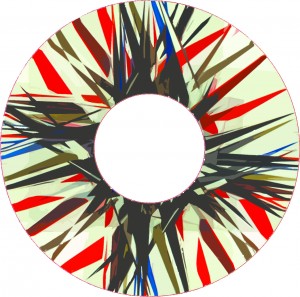 For the 50th anniversary, a call was put out for a new roof design, which will be painted for six months. Thousands of artists entered, and only six were chosen as finalists. Nate Mayfield, painting student at The University of Akron, is one of them.

Mayfield is not new to this sort of work. His experience with public art projects includes painting murals on large flower planters for the Austen BioInnovation Institute of Akron, and painting a mural for The University of Akron Engineering Department.

He is hoping that his design will continue the iconic, original Space Needle image, as well as propel it into the future. This is not unrelated to his studio work, which is centered on developing a progressive vocabulary of images.

The shapes that he paints create their own actions — sort of like verbs that are a result of innovation and thought, driven by design and the aesthetics of technological progress.

Mayfield’s design is a response to the Space Needle’s original “Galaxy Gold” paint job. According to him, the Needle simultaneously represents progress and timelessness. He sees this sort of energy in Akron as well, and he is hoping that his design will show this to the rest of the world.

Citizens have through Oct. 20 to cast their votes, and winners will be announced on Oct. 21. You can cast your vote online at spaceneedle.com/topthis.html.