Every day I find myself looking at other people and judging. I judge their looks, their habits, their ideas, their beliefs. I judge almost everything. Sometimes it’s almost like I can’t even control it. I look at someone, hear someone, read their opinions and think so many cruel and angry things. In my head, I put down and demean these people by calling them names and spouting out various insults. I even think of myself as smarter than these people, or at least more knowledgeable, more educated.

Later on, when I’m alone, I reflect on what I say, and I feel nothing but utmost disgust at myself. Who am I to criticize others? I know that I should respect other people’s opinions, and I always support the idea of relativity and understanding. Judgments without basis are harsh and cruel and easily avoidable. Yes, I ultimately believe that everyone should gain knowledge of our world and the people in it. Things like culture, religion, economics, political views, behaviors, art and countless others are so various and different that there’s no wonder that all people, including myself, are ignorant of at least some things. 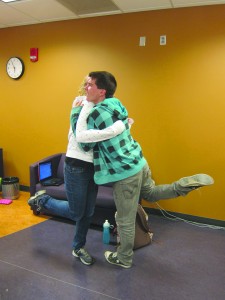 But ignorance is an enemy that is possible to defeat. With education, people begin to understand one another. And with this understanding comes tolerance and peace. Friendships and all sorts of relationships bloom as prejudice and stereotypes are defeated.

The human race is special because of the degree to which we innately share and work as a team. That’s why, for generations lasting thousands of years, we have been able to build magnificent civilizations, construct governments, and discover science. We naturally have a desire to work together. Humility is such an important lesson to learn.

As we live our lives every day, we tend to focus on ourselves. That tends to be the ideal of this culture — that we should be independent and do what’s best for us.

These attributes aren’t necessarily bad to have, but they are abused. People tend to focus so much on themselves that they often feel so independent that they feel alone. People emphasize their problems so much that they end up driving themselves crazy.

Everyone goes through problems in their lives, and many of these problems are shared between all people. Admittedly, some really do have it worse than others, and many people don’t see this. There is always someone who is going through rougher times than you.

If people were to see that they aren’t alone, then they would be more willing to help one another. Teamwork is key. Seek help, and help others. Don’t be alone, and don’t practice loneliness. I have a goal that, above all else, I want to achieve: I want to avoid the crazy and stupid idea that I’m smarter than a lot of people.

Many times have I been humbled, even humiliated, because I held the belief that I was somehow better and “more right” than some people. I’m horrified with myself. I know of a monster. He has many names. Arrogance. Cockiness. I’ve seen him in many other people, and I’ve been disgusted. However, I can feel this terrible monster inside me. I feel like I am becoming it, and I want to slay this monster before it gets any larger.

I simply will not allow it to take control of my mind. I will talk less and listen more. I will learn all I can in order to avoid making the mistake of judging or picking sides.

Philosophy has taught me that people think they know so much, but in reality what knowledge we really possess all amounts to practically nothing. I
don’t think we should live our lives second-guessing ourselves about everything, though. I think there are some things that are facts, and that some arguments are simply stronger and more reasonable than others.

It takes humility and even courage to be able to realize that what someone else is saying just might be correct. Strong people do not criticize others or attack them because they are different, but I believe that the strongest people are those who are willing to admit they are wrong. I feel weak, though.

I want to become strong. I am wrong about so many things. I’m sorry, world. I apologize for every cruel thought and every rude judgment. Help me to become a better person. I don’t want cruel thoughts to come into my brain, and I’m going to combat them.

I want to be one who tolerates, learns and listens. One who is willing to “walk a mile in others’ shoes.” I will never be completely rid of ignorance, but I swear that I will work to achieve my goal of destroying as much of it as I can. World, I want to see you become a better place for our children. I know I can contribute to this by achieving my goal. I love you, and will forever strive for optimism.