College life is stressful, no matter whom you ask. Life happens to every student, whether they are part-time or full-time, and it can be a struggle to balance good grades with a life of order.

Some female students live a life that would be enough to make most of us go crazy: these women are mothers and full-time students, and on top of everything, they work. 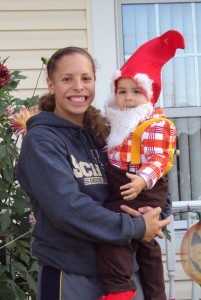 Re’Anna Browne and Brittany Cross, students at The University of Akron, are both mothers. Their schedules are packed to the limit. However, they get up every morning and do it without a second thought, in order to provide better lives for their children.

Browne has a two-year-old son, Noah. This is her last year at UA, and she is taking 16 credit hours. She also works part-time.

She lives in Akron with her mother, who is her biggest source of support for Noah. Browne wakes up every morning at seven to get Noah to day care.

Browne had Noah one week before classes started and returned to school immediately. She never took time off to adjust to her new life as a mother.

“If I wasn’t going to school, I wouldn’t really be qualified to work somewhere that afford the lifestyle I know Noah deserves,” she said.

Brittany Cross, also in her senior year, has a very different story.

Not only is Brittany adjusting to life as a new mom with a 10-month-old son, she is also a full-time student and commutes from Cleveland to Akron five days a week. Cross was living in Akron until she had her baby, and now lives with her parents in Cleveland, her hometown.

Cross had to quit her job when she moved to Cleveland, but she is in a sorority and has little to no time for herself. Her boyfriend is also a student.

Juggling parenthood, academics and a personal life is difficult for both of them.

“Dropping out of school was not an option because I am a strong-willed person,” Cross said. “I also want a good job so my son will not have to see me struggle, and I want to provide him with the best things,” Cross said.

Both of these women plan to go to graduate school after they finish their last year at UA. Neither of them even considered dropping out when they found out they were pregnant.

“I wasn’t going to let anything stop me from going before Noah, and my thought process didn’t really change once Noah came. If anything, he has become a catalyst to stay focused”, Browne said.