Do you want to play a game?

Night had fallen and it was chilly outside. The wind was howling and the trees that surrounded me shook. Leaves fell slowly toward the ground. The rustling around me produced a whisper. A solemn, haunting voice echoed into my ear: 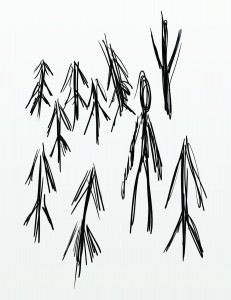 I found myself alone, in a forest, with no idea what to do or where to go. I was equipped with a flashlight, a camera and nothing more. Shuddering, I looked wildly around me, trying to grasp where I was. There was nothing but trees and a fence: a fence that was trapping me in this hell. I could hear nothing but the sounds of my breath and my footsteps, accompanied by a few cricket chirps here and there. They seemed to be mocking me.

Why was I here? Where was I to go? What was the purpose of collecting these pages? I was clueless, but I wanted to feel safe again, so I set out in search of the pages. I had no idea what to expect.

That wasn’t a description of an unlucky college student waking up, hungover, after a long night of partying. It was a description of the feeling one gets when they turn off the lights, sit down at their computer, shove their headphones into their ears, and begin to play the currently popular online video game, Slender. You might mock it now, but that’s simply because you haven’t played it.

Survival/horror video games are all the rage now: sweeping the nation and entrancing geeks with the lure of scaring the pants off of anyone who plays. Slender is just one of these games, but its association with a contemporary urban legend has gamers and internet junkies everywhere excited.

Slender is based around a character created by contestants who were asked to create paranormal and creepy effects with normal photographs. The contestants used pictures of children playing in playgrounds and forests, and Photoshopped into them the image of a tall, thin man standing amid the children. The man was dressed in formal attire, with a suit and tie, but he had no face — just a pale, white head. He had abnormally long arms, and was sometimes depicted with long, black tentacles stretching out from his back.

This figurative creature became an internet sensation within years of the contest, and several myths were spawned about the strange, enigmatic Slender Man. An example includes the documentary Marble Hornets, which, although considered a hoax, still presents a chilling and impactful story about a man being stalked by Slender Man. Another popular example is this game, Slender.

The objective of Slender is simple: gather eight pages that are scattered around the area in which your character is trapped. You are given a camera and a flashlight that has a limited amount of power, and you must scour the area in order to locate scraps of notebook paper that are usually attached to a certain object, such as a tree or a wall.

As you progress, the difficulty of locating the pages increases — along with the difficulty of surviving until you find them. The increasing fog and the loud, suspenseful music fills you with horror. You know that someone, or something, is after you. That something is Slender Man: you’re in his territory, and he wants you.

The goal is to collect all of the pages before he captures you. Slender Man does not chase you; he just randomly appears in your field of vision. A sudden, dramatic piece of music plays when you see him, followed by static and heavy breathing. You must feverishly collect the pages while he stalks you. Don’t look back; keep pressing forward. The rest is an experience you must have for yourself — and by yourself.

Compared to modern video games, the graphics of Slender are relatively poor. But for many people, this only increases the tension and fear that the game creates.

“The game is very simple in both its design and its gameplay structure,” said Logan Metcalf, a student at The University of Akron majoring in media production. “Because of this, the game’s scares are very effective.”

Others find the music — which becomes more intense every time you collect an odd number of pages — to be truly the most frightening part of the game.

“The music intensifies the game,” said Kent State University student Nicholas Watters. “Overall, it was the drums that killed me on the inside and made the game scary for me.”

“It was the music that I found to be the most frightening part of the game,” Strok said. “It just kept getting worse and worse.”

What everyone seems to agree upon is that the game is terrifying. The music, sound effects, gameplay and graphics all combine to create an experience not meant for the faint of heart.

“As the game went on and on, I got more into it,” Watters said. “My heart was racing, but I knew I had to push through. I was really excited when I played it, but it was a nervous excitement.”

Warning: this game may make you close your blinds and kneel in the fetal position.

Don’t look behind you.