As college students, it is easy to get caught up in the hustle and bustle of daily college life.

Finding a way to juggle working, class, homework and studying while still trying to maintain some semblance of a personal life can be overwhelming. 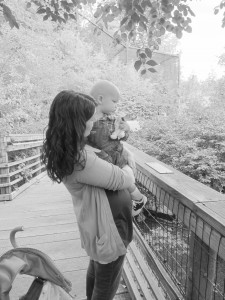 Imagine trying to juggle going to college and being a parent.

Ang, my best friend and my hero, lives this reality every day. She is a mother of two children and is working towards her Ph.D. in Neuroscience at Case Western Reserve University.

Ang is a person who can turn dreams into realities. She knows what it
takes to accomplish her goals while still making time for the people that she cares about.

She met her husband Joe while studying for her undergrad in chemistry at Walsh University. They married in Dec. 2008 right after Christmas, her favorite time of year.

Both Joe and Ang are working toward their Ph.Ds. They commute to Cleveland for their doctoral work from Tallmadge.

They had their first son Thomas, in April 2011.

Ang was able to take a short time away from her Ph.D. program for maternity leave to be with her new son while her husband continued his work on his degree and teaching at Walsh University.

When Thomas was six months old, I would stay with him during the day and go to my graduate classes in the evening. It was during that experience that I truly learned and appreciated the lengths that parents will go in order to provide the best life possible for their child.

Watching Ang say goodbye to her infant son to make the long commute to Cleveland was heartbreaking. What thoughts crossed her mind as she made that drive every day?

Ang just had her second child on Sept. 20, a little girl named Bridget. Joe called with the exciting news. I couldn’t wait to go meet her.

Then, I got a call that I will never forget. Bridget was born on a Thursday. Late Friday evening, Joe called.

“Ang came home from the hospital, but Bridget didn’t,” he said.

Bridget was born with some complications.She had transposition of the great vessels and needed surgery.

According to the national library of medicine, transposition of the great vessels is a heart defect that occurs from birth. The two major vessels that carry blood away from
the heart — the aorta and the pulmonary artery — are switched.

Instead of celebrating and taking in the newest addition to their family, Joe and Ang had to cope with their new daughter having to get surgery and arrang for someone to stay with Thomas so they could go to the hospital to see her. They also had to make plans for the weeks and months to come.

After getting Bridget through her first surgery and preparing for her next surgery, the family dog became sick and had to be put to sleep.

Ang said that they were one truck away from becoming a county song. One would never know that she was going through all these challenges. Ang remained resilient and upbeat. She is a woman of strong faith.

It moments like this, when it would be easy to break down and lose it, Ang doesn’t. She tries to find the good in every situation. She can give the pessimist hope.

She told me that when Bridget came home, I would have to meet her. There was never any question in her mind that she would soon be bringing her daughter home.

I bought Bridget her first pink tutu onesie, and Bridget couldn’t wait to try it on her. She brought it to the hospital and asked the nurse if Bridget could wear it. There, in her little incubator, lay a stylishly-dressed ballerina.

Ang and Joe spent countless hours at the hospital with their new daughter, and I was able to help watch Thomas on the weekends.

I was lucky enough to take Thomas to his first trip to the Akron Zoo with my boyfriend. Thomas is the most well-behaved one year old I have ever met. He is so polite and intelligent. Thomas loved watching the turtles and riding the “choo-choo” train. It was actually sad when that day came to an end. I hope I have a son like Thomas some day.

Bridget had two operations and was finally able to come home with her parents on Friday.

Ang said that Thomas loves his new sister “too much.” He constantly wants to hug her and has to be reminded that he has to love her gently.

When I get caught up and stressed out with everything I have on my plate, I stop and I think of Ang. She is a woman who can and has done it all.