Women's soccer hopes to finish off their season strong

After a relieving win over Bowling Green on Sunday, The University of Akron’s women’s soccer team returns home to FirstEnergy Stadium-Cub Cadet Field to host Western Michigan and Eastern Michigan this weekend. 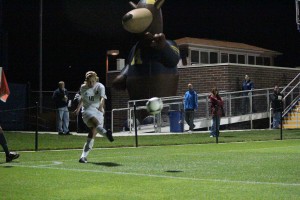 Akron was able to get out of its eight-game losing streak this weekend with the 2-0 win over Bowling Green.

“We competed very well,” interim head coach Vernon Croft said. “It was such a great relief for our players and for our morale.”

This coming Friday, the team will face Western Michigan, a team that lost in last year’s MAC championship. Western Michigan is currently 5-7-3, and 1-3-3 against MAC opponents.

“They lost the conference championship game last year, so it’s going to be a tough one,” Croft said.

Western Michigan has not played a regular match since tying with Ball State on Oct. 7. The Broncos’ matches with Kent State and Ohio were both canceled due to field conditions.

“Keeping ourselves in the game will be the key,” Croft said. “As long as we don’t get to the point where we have to chase ourselves back into the game, we should see the result we want.”

Eastern Michigan is coming off a blowout loss to Akron rival Kent State, to whom they fell 0-3.

The season is coming to a close, with only three games left. The Zips have really dug themselves into a hole, going 1-7 in the conference, but are optimistic that they will be able to end the season on a strong note by securing a place in the MAC tournament.