The Dating Doctor visited The University of Akron Wednesday evening to shed light on the realities of dating.

Dave Coleman, better known as The Dating Doctor, shared the do’s and don’ts of relationships, as well as how to boost one’s confidence and find in themselves what makes them, personally, a great dating option. 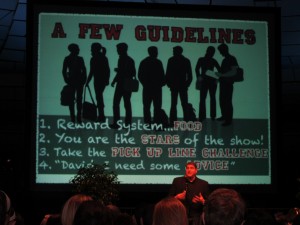 Emily Sherwood, who has seen Coleman eight times, has never grown tired of him.

“Even though his advice is timeless, it’s definitely his presentation of the advice that keeps me coming back,” Sherwood said. “As a performer, you can tell that Dave has a unique passion for what he does.”

Sherwood has been to many of Coleman’s leadership training programs, as well as his dating lectures.

“Dave’s raw honesty manages to be informative and hilarious at the same time,” she said. “Even after eight times, I can’t wait to see him next year!”

Besides being a well-loved and recognized speaker, Coleman is also an author and an entertainer, as well as a radio and television personality. Coleman’s first book, “Making Relationships Matter,” has had two printing runs. His first publishing led him to write “Date Smart!” and “101 Great Dates.”

“He brightens up people’s days in the line at the grocery store; he does not know a stranger,” Razete said. “He just starts up a conversation with people, and everyone leaves after talking to him with a smile on their face.”

Razete joked that Coleman doesn’t know how to be laid back.

“I sent him on a full spa day, but he told the workers there that he was The Dating Doctor and ended up giving them advice throughout the whole spa. I sent him to the spa so that he didn’t have to work,” she said.

According to Coleman’s website, he has spoken to more than two million people throughout the U.S., Canada and Europe. He has spoken to an additional 20 million people through various appearances via media outlets, as well as, according to his website, “more than 2,500 college campuses, corporations, conferences, single’s organizations, military installations, churches, and civic groups.”

Coleman also speaks to people through his Twitter account. Coleman offers to tweet back responses to any questions his fans and friends tweet to him. He encourages anyone with dating concerns, who has been to any of his performances or visited his media sites, to tweet him @D8ngDoctor.

“I went into his lecture pretty skeptical,” said UA student Elizabeth Davis. “I’m not really into dating speakers, but after watching the whole show, his humor won me over. I actually learned some valuable pieces of information while having fun at the same time.”

To learn more about Coleman, or to read some of his dating advice, you can subscribe to his Facebook page or visit his website at datingdoctor.com