The University of Akron volleyball team defeated defending Mid-American Conference champions the Central Michigan Chippewas on Saturday night to up their conference record to 5-5 and put themselves in position to clinch a conference berth.

“They are a very tough team. There is a lot of grit on that side, and I was happy that we were able to match that,” said head coach Ron Arenz after his team captured their second victory of the weekend. 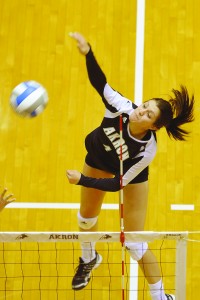 Akron opened up the first set on fire Saturday, as they took a 19-9 lead. Though Central Michigan tried to make it close, Akron eventually cruised to an early advantage. Central was able to pull out the next set to tie the match heading into the break.

The Chippewas were the ones to do so.

Akron was able to take a 20-15 lead and then battle again. Only this time it was OK to exchange points with the defending champion. They took the third set 25-20.

In the fourth set, neither team blinked. The teams exchanged points all the way throughout the set, until the end. The match went into overtime, where Akron was able to pull out two crucial points in a row to clinch the set and the match.

Akron entered the Breast Cancer Awareness weekend needing to at least split the two games to keep itself in good position. They ended up winning both.

On Friday night, Akron played one of their more important games of the season. While hosting Eastern Michigan, Akron opened the weekend knowing that they needed a result to keep pressure on the other teams in the conference.

Akron had a similar result on Friday. They were able to take the first set rather easily, but then dropped the second. After the break, they won consecutive sets to take the match.

Akron is now third in the MAC East, and sixth in the conference overall. They have six more matches to play, so anything can happen. But the Zips have placed themselves in a spot where they control their own destiny, and have already played the toughest part of their conference schedule.

Akron will next play Buffalo on Thursday and Toledo on Saturday night.