Docs rock out for charity concert

Sequined gowns, Motown, Ozzy Osbourne and giant rats are not things you often associate with physicians. If you had attended this year’s Docs Who Rock event at E.J. Thomas Hall, you may have changed your tune.

Since it began in 2004, Docs Who Rock has featured Summit County bands of which at least one member is a doctor. It was conceived by Michael Gaffney, vice president of marketing for the Summit County United Way. The first Docs Who Rock event was held in the main auditorium of the Akron-Summit County Public Library, which seats 430 people. The show has been growing since then, and is now at its third venue, E.J. Thomas Hall, which seats 2,955. 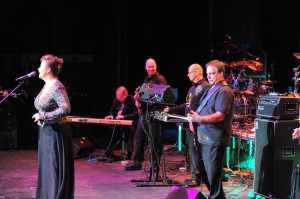 Kari Mancuso, the talent coordinator for Docs Who Rock, attributes the growth to those who want to come out and see doctors in a different light.

“I think that curiosity has been the greatest driving force behind people showing up,” Mancuso said.

Curiosity is indeed a driving force behind Docs Who Rock. Seeing one’s doctor in such an unusual setting — performing for a crowd — is out of the ordinary, but the show has proven successful.

“Word has just gotten out about what a great show this is,” Gaffney said. “There are some really talented musicians in town, and I thought every one of those bands is somebody I’d like to sit and watch do a concert.”

In fact, someone who happened to wander into E.J. Thomas Hall to see the opening band — which performed the Motown favorite “I Heard it Through the Grapevine,” complete with backup singers sporting Afro wigs — might have been surprised to find out that all the acts featured doctors.

One of these backup singers, Dr. Terry Gordon, performed double-duty in the show. He and Gaffney each acted as co-master of ceremonies, but Gordon’s showmanship was unparalleled. In previous years, he has appeared as the Native American from the Village People, Rod Stewart, Mick Jagger and, last year, Lady Gaga. In addition to his Afro-sporting backup singer, Gordon also portrayed a backwoods fiddler on the hunt for a giant rat. The different styles and techniques of Gaffney and Gordon kept the show lively and humorous in between acts.

The performances were equally as diverse as the emcees’ delivery-styles. The acts included a piano duet from The Novus Clinic Duo, which elicited a standing ovation. Several acts performed rock numbers, but another type of performance stole the show this year.

Dr. Todd Beyer said he dedicated his performance his father who died fourty years ago. Last Friday marked the fortieth anniversary of his father’s death.

“He loved this particular concerto and this is one of the reasons I decided to learn it,” Beyer said. “Dad taught me to set my goals high and not to fear failure as that is what leads ultimately to success. So tonight I will honor him and play from my heart. I would never be who I am today without his encouragement, love and example. I owe him everything.”

Several groups, including the winning act Rhythm Method, featured female vocalists who could rival any divas.
“I thought their performance was really good and their vocals were well done,” said University of Akron alumnus Ashley Fuchs. “I’m sad I never came to this event while at UA.”

Even at intermission, as patrons clamored to talk to performers, it was clear that this event could stand alone simply on the talent present.

Another female vocalist, Carlise Star Brown, along with her group, Soul Purpose, performed an upbeat and rousing rendition of the song “Lady Marmalade.”

“I was very excited to do this event because its proceeds go to charity,” Brown said.

In the end, Docs Who Rock is about helping others. The music may be entertaining and the skits funny, but the message is real. It’s about reaching outside of one’s comfort zone and seeing things in a new light — like seeing your doctor rock out on a bass solo. The concert also helps people recognize the need for charity for the less fortunate and elderly residents of Summit County. Docs Who Rock does this while presenting a comedic and diverse musical showcase that is sure to delight those who attend.