Smart phones are making us dumb

Technology has become such an integral part of so many people’s lives through the forms of computers, tablets, music devices and especially iPhones or other Android phones.

For many, a smartphone like this is never farther away than their pocket, and is torn out at the slightest “beep” or vibrate. Many people can’t stay away from their phones for even a short conversation. 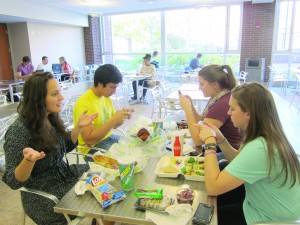 Very often, when I am out with friends, I will watch as one of them pulls out their phone in the middle of a conversation and begins texting or scrolling. Even at home, while watching a movie, I will see a constant glow out of the corner of my eye.

For many people, this is not uncommon. It seems to happen to me quite often, and it tends to lead to awkward moments of standing around and waiting for the right moment to interrupt my friends’ intent stares into their phone screens.

I am, obviously, not very fond of that feeling.

To make things clear, I do not own an iPhone, or whatever other smartphone is popular nowadays. Instead, I have one that is now considered simplistic by many people’s standards. It has a screen and a number pad on the outside, that flips open to reveal another screen and a keyboard. Fancy, right?

Although I can use it to browse the Internet and to listen to music, I use it mainly for calls and texts — as well as the occasional calculator, when I’m trying to make sure that I don’t under-tip my waiter at a restaurant.

Maybe this is why I have a hard time understanding why many people cannot leave their phones in their pockets in the company of others, especially during a conversation. I am definitely not the only one who thinks this.

“It bothers me mostly because I feel like they don’t care what we’re talking about,” said Rachael Delaria, sophomore nursing major at UA. “It makes me feel like our conversation isn’t important enough.”

A recent study by Lookout Mobile Security found that 58 percent of smartphone users do not go more than an hour without checking their phones. The age range that scored highest in this particular area was 18 to 34, at 68 percent.

The study went even further to see when people pulled their phones out. Of the people that Lookout talked to, 30 percent had checked their phones at the dinner table, 24 percent while driving, and 10 percent at religious services.

To be honest, I am surprised that those numbers aren’t higher. I can’t think of the last time I went out to dinner and didn’t see cell phones out on the table, or in the hands of people trying to shove spaghetti into their mouths and missing only because they are paying more attention to who just broke up on Facebook than where they are aiming their forks.

I have to admit, I am not completely immune to this new communication norm. I have pulled out my phone to send a text in front of others.

I also understand the need for someone to take a phone call or to answer a quick text, and even how useful a phone with Internet can be for looking up information on the spot. However, there comes a point when a person crosses from politely using their phone to rudely and excessively using it. That line is unfortunately being crossed more and more.

With technology becoming so advanced that we can connect with people anywhere in the world with just a couple of clicksß, people miss out on more of the opportunities and experiences right in front of them.

I have to say, I completely agree when Lookout said that Miss Manners, and our grandmothers, would be disappointed.