I ask the reader to please cut the soft drinks, candy, desserts and bread out of their diet if he or she desires to avoid storing too much fat. Mayor Bloomberg proposed a ban on soft drinks over 16 oz. in size, but that rudeness doesn’t explain why people should stop drinking them. A short intro and a plea for discussion is required.

Sugar. People see this as fattening because people think of an obese person drinking gallons of Pepsi in a McDonald’s. What’s important is how insulin, a hormone that stores nutrients, also stores some of that sugar as fat. 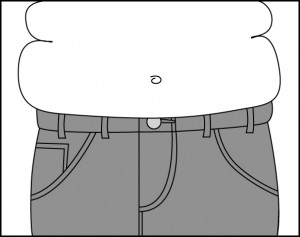 Insulin is essential — you’d be underweight, or dead, if your cells couldn’t absorb what they needed — but too much of it will store fat before you even try burning off that soft drink.

You may think that exercising more and eating less is key to weight loss — and if that’s the case, then why should insulin matter?

According to Dr. Robert Lustig of the University of California, San Francisco, insulin makes you eat more. This is because once you eat a doughnut with toast and bacon, for example, the insulin will store some of that food right away; unless you eat more, you may feel tired, hungry or maybe just not the best.

As Robert explains in his YouTube video “The Cause of Obesity,” this means that obese people eat and eat because the storage of energy makes it feel awful for them to eat less or to exercise more.

Robert is an expert in the field, but the only solution I heard was a “very low-carb diet,” which is too vague and too short. Then I heard about applying evolution to nutrition in order to determine what one should eat.

Mark Sisson, former triathlon runner and author of “The Primal Blueprint,” goes beyond diet and into lifestyle.

His website, marksdailyapple.com/primal-blueprint-101, includes information about why grains are bad, what oils are good, why saturated fat is actually good, and more.

Assuming that all of the above is true, then what are the best ways to get people to discuss their diet/lifestyle and take suggestions? I am morally opposed to banning food like brownies and sodas from McDonald’s or any place selling food.

The same goes for limiting their hours. I consider it arrogant to try to impose my lifestyle or eating habits on others who have different value scales for their diets.

Readers are free to check out the references made above, and even to try them. They may also write their own opinion pieces in which they agree with and add to this piece, or state why a diet high in fat and low in carbs, as seen above, is a bad thing.

As for America’s obesity, I think people should start asking themselves, “Why eat that pasta, or drink that sugary fruit juice?”

After all, I think people will be open to other diets or lifestyles if they wonder “Maybe that coconut oil is tasty and healthy…” instead of dismissing such foods as trash.