Recent weather not enough to close this campus

The storm weather around campus for the past few days has caused wind-swept hair, wet clothes and a disgruntled attitude for many students who had to walk to class in the rain and wind.

This disgruntled attitude was also fueled by the fact that many students were hoping that The University of Akron would cancel class on Tuesday due to the weather stirred up by Hurricane Sandy. 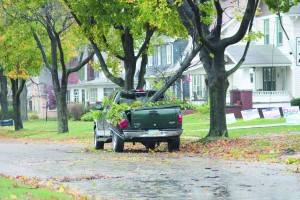 The University of Akron released a statement on Tuesday about why they decided not to cancel classes. The statement said that the roads were open, and that FirstEnergy power outages were minimal in Summit County. The statement also said that all campus buildings had power, and that there was no flooding in the buildings.

It also explained why the school stayed open when many public city schools in the area were closing.

“Our students and employees are adults. They are capable of preparing themselves for inclement weather and for deciding if weather conditions and their own personal circumstances warrant altering their schedules because of the weather,” the statement said.

Paul Callahan, the assistant vice president of Campus Safety, said in an email response that he understands why some school districts had to close, and why Kent State University did as well.

“Parts of Portage County, especially farther north, experienced much more wind and rain damage than we did here in Summit County. And therefore, travel to Kent was more difficult,” he said.

Callahan, who helped make the decision to stay open, said he was in contact with local and county officials through Sunday night, and monitored different TV news stations and websites for the weather.

“In my opinion, the safety of the students, faculty and staff was not compromised by my recommendation,” he said. “Safety is my primary consideration, and it is the university’s position as well.”

According to the statement, another reason that UA remained open was that students pay for the services provided to them by the school, and closing would deny them those services.

“If our observations and consultations indicate that conditions do not present an undue threat to the campus community, we are obliged to provide the service that we have promised to our students,” the statement said. “In other words, our job is to keep the university open.”

Melanie Stopar, an organizational supervision and nursing major, said that the weather really didn’t seem as bad when she got to campus, and that she was glad class wasn’t canceled.

“To be honest, there was a lot of wind and rain, but it really wasn’t that bad,” she said. “In some classes, if you cancel one class, it is hard to catch up.”

Stopar said that she noticed parking lots were not as full, and many of the students in her classes were missing.

“The teachers who did have class were really appreciative of the students that did show up,” she said.

While the hurricane weather was not enough to close class, it was bad enough in other parts of the country for President Obama to cancel his campaign stop at The University of Akron on Wednesday. Obama, who has canceled other campaign stops, including one to Cincinnati, canceled because he had to stay in Washington D.C. in order to monitor the hurricane.

With winter quickly approaching, there are sure to be other situations where students need to stay up-to-date with warnings, closings and safety on campus.

“You’ll be the first to learn when we close because of weather or when a situation arises that immediately affects your safety,” Kropff said in an email.

University officials use other ways of communication to contact students with emergency information.

“Depending on the nature of the situation, we may also post it to the university’s home page, broadcast it over our outdoor/indoor warning systems, and use our social media channels,” Kropff said.

For more information about campus safety and warnings, visit uakron.edu/safety/.