The University of Akron volleyball team extended their winning streak to four over the weekend as they took down both Buffalo and Toledo.

Akron swept the Buffalo Bulls and pulled a three-set-to-one victory over the Toledo Rockets. 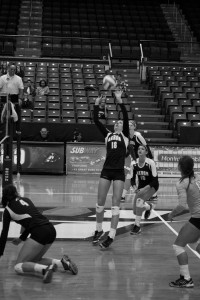 It became dicey in the third set for the Zips. Though they captured the first two sets rather handily, they faced a deficit of 21-16. But the Zips rallied back from it and took the set and the match with a 25-23 outcome.

One of the stars of the game was Chelsea Harvey. She collected 12 kills in the match, which was one of her best outputs of the season. Along with Harvey, Alex Cocklin and Tina Dimitrijevs put up nine kills and eight kills respectively. Buffalo entered the game as one of the lower-ranked teams in their division, so it was important for the Zips to come out and show their dominance. Buffalo is unlikely to make the postseason.

Toledo, coming from the west, is always a dangerous opponent for the Zips. However, this year was much different, as the Zips were able to capture a two-set-to-zero advantage early. In the set, Akron ran away from the Rockets. They won the first set 25-13 and the second 25-16. Though Toledo was able to pick up the third set, Akron responded quickly and won the fourth 25-21.

The Zips solidified their third-place position in the Mid-American Conference East Division and moved up to fifth place in the Conference overall. With just four matches to play until the tournament, Akron will next face Northern Illinois.

The Zips narrowly lost to the Huskies in their first and only meeting.

Akron will travel to Miami and Bowling Green this weekend. This will be their hardest trip of the year, as both teams are above Akron in MAC standings. They will then round out their regular season schedule with Kent State and Ohio at home.