Both the Akron and the Kent State coaching staffs agreed that their records prior to Saturday meant little to nothing in the annual rivalry game.

By the end of the first quarter, those thoughts appeared to be as relevant as ever, with the Zips leading 14-0. However, the next three quarters belonged to the Flashes, who won 35-24. 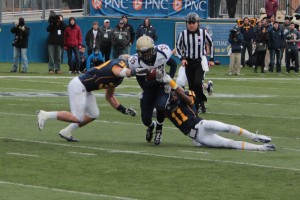 “I can’t fault these guys,” said Zips head coach Terry Bowden. “They gave everything they had.”

In fact, each of the Flashes’ five touchdowns came by way of their rushing attack.

“We didn’t quite have enough,” Bowden said. “(Archer) really kept them in the game.”

Akron found their success through the air early and often.

Dalton Williams and Jerrod Dillard started the scoring eight minutes into the first quarter with a 13-yard connection. The touchdown pass capped a 14-play, 89-yard drive.

Williams found Dillard again with 29 seconds to go in the quarter, this time for a 21-yard touchdown.

After a Durham touchdown run to make it 14-7 with 11:39 to go in the second quarter, Akron got a big play four minutes later from their running back.

Sophomore Jawon Chisholm took a hand-off from midfield and broke loose into the end zone to push the Zips’ lead back up to 14. The run completed a drive that started on the Zips’ own 6-yard line.

Kent quarterback Spencer Keith would respond with a touchdown run of his own with 3:19 to go in the first half.

Zips kicker Robert Stein would once again push it to a two-possession lead as the first half clock expired. The 36-yard field goal made the score 24-14.

The scoring would stop there for the Zips. Durham and Archer dominated the second half.

A touchdown run by each in the third quarter gave Kent a 28-24 lead.

The Flashes defense stepped up, not allowing a Zips drive of over 30 yards in the fourth quarter.

After Akron failed to get a drive started late in the fourth quarter, Durham sealed the victory for Kent with a 15-yard touchdown run with 38 seconds to go.