As I look at my absentee ballot for this election, I wonder, “Which presidential candidate really is going to send this country forward and make the progress that I want to see?” I soon find that this question is not so easily answered.

I have values and goals that I want to obtain, and I want a president that will help me get there. The candidates have clear stances on the major issues, but as a woman, I have more issues in mind. And the way that President Obama stands on the issues that are important to me is why I voted for him. 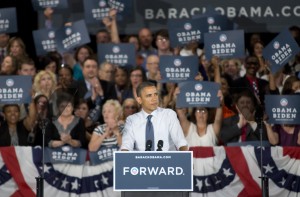 I think that he is going to take this country where it needs to go. He understands the needs of the people and what has to be done to take this country forward, not back into a place that we have worked so hard to change. There are two major issues that are important to me and that got Obama my vote.

The first issue that I looked at — and I know this is a big one — was abortion. Obama wants to keep things as they are. Abortions are legal and pro-choice. I also see that Obama demonstrates his beliefs no matter who he is talking to. The following can be found at ontheissues.org.

Obama said, “[An abortion protester at a campaign event] handed me a pamphlet. ‘Mr. Obama, I know you’re a Christian, with a family of your own. So how can you support murdering babies?’ I told him I understood his position but had to disagree with it.

“I explained my belief that few women made the decision to terminate a pregnancy casually; that any pregnant woman felt the full force of the moral issues involved when making that decision; that I feared a ban on abortion would force women to seek unsafe abortions, as they had once done in this country.

“I suggested that perhaps we could agree on ways to reduce the number of women who felt the need to have abortions in the first place. ‘I will pray for you,’ the protester said. ‘I pray that you have a change of heart.’ Neither my mind nor my heart changed that day, nor did they in the days to come. But that night, before I went to bed, I said a prayer of my own — that I might extend the same presumption of good faith to others that had been extended to me.”

Abortion is not an issue of whether I feel it is murder or not, but, to me, an issue of allowing women to make the choice that is best for them and to keep control of their bodies and lives. Mitt Romney has said on several occasions that he would repeal Roe v. Wade and take that choice away from women.

The next issue — another big one — is homosexual equality. Lesbian, gay, bisexual and transgender (LGBT) people have been in a constant battle with society and the government for a very long time, but just recently big things have happened, thanks to Obama.

Our LGBT military members are now able to serve openly, instead of having to serve secretly under Don’t Ask, Don’t Tell (DADT). Those men and women deserve that freedom for doing something that not everyone is brave enough or strong enough to do. They deserve to be treated equally and to be free of discrimination when they are sacrificing more than we understand and putting their lives on the line so that we can continue to be free.

Mitt Romney doesn’t support this progress. Obama acknowledges that the repeal of DADT is not the end of the progress that needs to be made.

According to whitehouse.gov, Obama said, “We’ve got a lot of hard work that we still have to do, but we can already point to extraordinary progress that we’ve made . . . on behalf of Americans who are gay and lesbian, bisexual and transgender.”

This just shows that he isn’t done. He wants to progress and have equality for everyone. Mitt Romney’s voting record and platforms show that he is opposed to giving LGBT people the right to marry.

He has stated several times that he feels that marriage should remain between a man and a woman. I do not believe that he has the ideals to take this country into the future if he doesn’t want equal rights for everyone.

These issues promote change in the country. They are about progress and equality. Women should be able to choose whether or not they want to have a baby.

A woman is capable of making decisions about her own body. She is able to decide what she wants to do, and she alone has to deal with her decision.

Why? Because love is love, and just because a person isn’t heterosexual doesn’t make them less of a person. They deserve the same rights as everyone else.

Obama is helping these causes. He is promoting a value that this country was founded on: Freedom.