When President Barack Obama announced his plans to hold a campaign rally at the James A. Rhodes Arena last week, English professor Dr. Bob Pope was reminded of seeing former President Bill Clinton in 1991 with his daughter, Alexis.

Alexis Pope, a 29-year-old alumnus of The University of Akron, was able to see Clinton again last Thursday when he visited the John S. Knight Center. 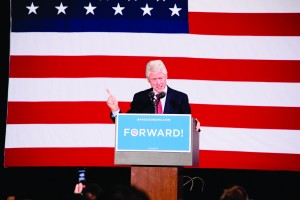 “He’s the kind of guy that makes you feel understood,” she said in an email. “He’s on your side. He knows what it means to be out of work, underpaid, struggling, losing hope (but not victims).”

Alexis Pope first saw Clinton, along with Hilary Clinton and Al and Tipper Gore, in New York the summer before he was elected president. Alexis was just 7 years old.

“My daughter was on my shoulders so she could see,” Dr. Pope said. “When Tipper spoke, I told her to wait until I said ‘now’ to wave. Bill and Al and Hillary sat behind (Tipper), facing the crowd. When they looked our way, I said ‘now,’ and she waved. The three of them waved back at her. She was thrilled.”

According to Dr. Pope, his daughter saw Clinton again when he visited the Goodyear Airdock. She was about 8 years old.

Alexis Pope had the opportunity to see him for the third time when he came to Akron to campaign for Obama’s reelection.

During his speech, Clinton talked about the importance of facts in this election, saying that as far as he has understood, the truest thing the Romney Administration has said is that they won’t be dictated by fact-checkers.

“I’m still sort of partial to the facts,” he said.

Clinton also talked about what ideas he believes are important to the country and its economy.

“I believe that a country that operates on ‘We’re all in this together’ is more effective than one that says, ‘You’re on your own,’” Clinton said.

He went on to say that he believes a strong economy and government promoting shared prosperity is better than the trickle-down effect.

“And I know that budgets work better if they’re based on arithmetic instead of illusion,” he said.

“This is the first time that I have had the honor and the privilege to sing for a president of the United States of America,” Banks said.

Banks said she thought the former president’s speech was fantastic.

“I think that he hit all the main points,” she said. “And it’s like he said: it’s plain arithmetic. All we have to do is know the figures. You can add them up for yourself, and the proof is going to be at the end. It won’t mean a thing if we don’t go and vote.”

Clinton said that during his term as president, he loved Ohio and got to know the regions of the state. He stressed the importance of Ohio in this election.

“It’s OK with me that you get to decide this election,” he said.