President Barack Obama was reelected on Tuesday for a second term as the president of the United States.

For every student at The University of Akron that is happy with the results of the election, there is another that is disappointed. 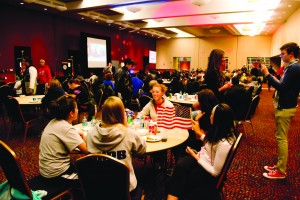 Melanie Valentine, a sophomore physical therapy major, said that she voted for an independent candidate because she didn’t like either main candidate.

Kelly Dawson, a sophomore business major, voted for Republican candidate Mitt Romney. While she thinks that everything is OK, she doesn’t like the way welfare is right now. She said that she has two jobs right now and wants the money that she pays in taxes to go to people who are trying their hardest to obtain or maintain a job.

According to Eric Zito, a sophomore psychology and dance major, Obama is the lesser of two evils.

“I hated both of them,” Zito said. “The Constitution does not allow them to make the changes they said they would. They have been lying to the people.”

Zito said that while backstabbing is a part of politics, it seemed to be the main component of this election. He voted for Obama.

“He knows the people from over the last four years,” Zito said. “Now we just have to see how he does.”