National Hunger and Homelessness Awareness Week kicked off at The University of Akron on Sunday at 6 p.m. with the Cardboard City event in the Student Union.

The event, led by serve Akron of Civic Engagement Programs, was the first of its kind to be held at UA. Students who attended built shelters out of cardboard for the night. 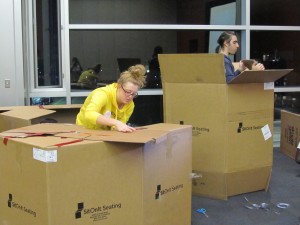 “Cardboard City is a way for our students to really find out what being homeless means,” said Jenny Coulter, a civic engagement graduate assistant who helped run the event.

Although the event was cut short late in the evening due to a low turnout, those who did attend took some insight away from it.

“Not everyone is privileged,” said senior theater education major Alex Funk. “Building a community is what it is all about. Having that friendship with people, working, and building a community together: That’s what is important.”

Though the event didn’t go as planned, a speaker was there to spread awareness, and students made ten fleece-tie blankets to be donated.

Events for National Hunger and Homelessness Awareness Week will continue until Saturday. There will be a canned food drive on campus all week and a banquet on Thursday, at which guests will be assigned a level of income and served a meal corresponding to  that income.

Civic Engagement Programs hopes to offer the Cardboard City event again in the future and to have a better turnout and more overall interest.