The University of Akron men’s soccer team advanced to the Round of 16 in the NCAA tournament for the fifth straight year on Sunday when they took down Michigan 2-1.

With most of the campus and the scoreboard without power, the lights at FirstEnergy Stadium-Cub Cadet Field stayed on and the Zips (18-1-2) turned up the pressure on the Wolverines. 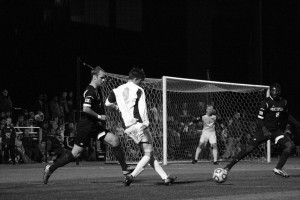 Eric Stevenson scored the first goal of the match at the 43-minute mark off a volley at the top of the box for his seventh goal of the season.

Senior Thomas Schmitt put the Zips ahead 2-0 after halftime off an assist from Aodhan Quinn for his third goal of the year.

A foul by the Zips resulted in a free kick and a goal for the Wolverines, but during the altercation a Wolverine was shown a red card and ejected.

The Wolverines were forced to play a man down for the duration.

They almost tied the game in the 86th minute, but goalkeeper David Meves made a “tremendous save,” according to head coach Caleb Porter.

Creighton beat Washington 4-2 to advance to the Round of 16. The Zips and the Blue Jays played to a 1-1 draw earlier this season.

“We’re excited to be in the Round of 16,” Porter said after the game.

He went on to say that the game wasn’t pretty, but the team found a way to win.

“Our guys are empowered when the pressure is high and the margin for error is slim,” he said. “Our guys want to make plays, and they play to win.”

Student tickets for Sunday’s game are on sale for $1 at the ticket office in InfoCision Stadium, and online at gozips.com/tickets.