Imagine walking through the land of Canaan in Biblical times and finding yourself surrounded by energetic, singing and dancing men and women who were narrating their adventures. You may think you’re dreaming, but in the case of “Joseph and the Amazing Technicolor Dreamcoat,” you are living in reality. A Biblical legend becomes a living, musical phenomenon in “Joseph and the Amazing Technicolor Dreamcoat.” Written in 1968 by the famous theater composer Andrew Lloyd Webber, “Joseph” is inspired by the age-old tale of betrayal, compassion, and forgiveness found in the Book of Genesis.

The story involves a man named Joseph and his eleven brothers, who, enraged with jealously, sell their brother into slavery and steal his coat of many colors, which was given to Joseph by his father, Jacob. The focus of the story is what happens to Joseph and his brothers afterwards. 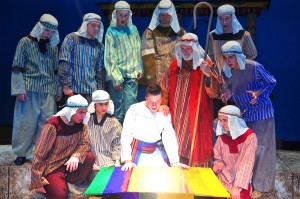 The music in the show is a collection of various different styles, ranging from ’50s rock to the groove of the ’70s and the rhythmic sounds of reggae. As you follow along with the story, you are exposed to several musical decades. The ever-changing genres of music in the show add to the blast-from-the-past plot of the musical in a way that keeps the performance exciting and interesting. The most notable thing about “Joseph,” however, is the elegant coat of many colors worn by the lead, Joseph. The wearer of the coat last year, Brett Parr, has stepped onto the stage again this year, eager to provide viewers an exciting show and a lasting memory.

“A lot of the audience members we get are children,” said Parr, a senior at Kent State majoring in communication. “Many of them are experiencing theater for the first time and I love to be able to entertain them and see them smile.”

To Parr, the message “Joseph” is trying to convey deals with hope.

“In the show, Joseph is discovering that any dream is possible and that’s exactly what the audience should know,” said Parr.

According to Jackson Sturkey, a former student of the University of Akron and the actor who plays the role of narrator, the theme also deals with internal struggle and changing for the better.

“What I find most impactful about the show is that the main character does not realize the best version of himself until he learns his lesson,” said Sturkey. “It gets me every time.”

In order to find out what happens to Joseph and his brothers, you must stop by the Weathervane Community Playhouse.

The Weathervane Community Playhouse is a non-profit community playhouse, where the goals are to help spread the live entertainment of theater throughout Northeast Ohio, inspire young people interested in performing arts and provide the opportunity for said young people to act, sing and dance on a stage located close to home. “Joseph” is one of many shows that are put on at the playhouse, but what makes it special is that the show is recurring. It is put on every year, with each year presenting a new cast full of children, teenagers and young adults. According to Sarah Bailey, the director of “Joseph” for ten years now, the show is put on annually because it is well-equipped with cast members young and old, providing an experience for all ages.

“I love the energy I get from the young actors,” said Bailey. “And the show does a great job of getting them excited. They work hard and do their best, and when they hear the audience’s reaction it creates an amazing first theatrical experience for them.”

How Bailey sees it, the themes of the show also mimic those of the holiday season, so bringing the show back every year is a way to introduce it.”The major themes of ‘Joseph’ deal with forgiveness and compassion. Every character goes through some sort of change. It provides the audience with a message and a fast-paced, fun environment,” said Bailey.

“Joseph and the Amazing Technicolor Dreamcoat” will be held at the Weathervane Community Playhouse, which is located 1301 Weathervane Lane, Akron, OH, 44313. Performances last until Dec. 23, and tickets for the show can be purchased online atweathervaneplayhouse.com, by phone at (330) 836-2626, or at the box office during its open hours, which are listed on the website. “Joseph” has become a local tradition and is worth the watch. An enticing, memorable, and purely fun adventure awaits you at Weathervane this month and next.

“If you think about it,” said Sturkey. “The show that you get to see is special because no one else will ever get to see the exact same show that you saw. Sure, it’s the same musical, but the experiences are completely different every time, and that’s the wonder of live theater.”