As T.K. O’Grady from WONE radio station counted down, the lights in downtown Akron turned on, followed by Lock 3’s lights, and finally the Christmas tree covered in ribbons, LED lights and the star on top.

The lights came on Friday during the first snowfall of the year as part of the ninth annual Holiday Lighting Ceremony in Akron. 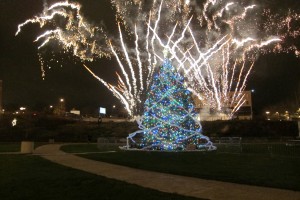 “This year’s tree, a 30 foot Blue Spruce, was rescued and recycled after the horrible winds of Hurricane Sandy knocked it down,” O’Grady said.

Mo’ Mojo, a Zydeco-based band, brought with them their Christmas spirit by playing live Cajun music at different times throughout the night.

The ice skating rink was warmed up for the crowd by Akron’s award-winning skater Zachariah Szabo. Next to heat up the ice, Wooster’s synchronized Figure Skating Club, Precise Ice, skated to music from the Trans-Siberian Orchestra.
The Akron Aeros’ new owner came on stage to announce that one of their team members also ice skates. Orbit, the Akron Aeros’ mascot, came onto the ice for a performance.

Akron’s own Thirsty Dog Brewery decided to start their holiday spirit off with the tapping of the Twelve Dogs of Christmas Ale keg, making the crowd wait for the chance to taste the Christmas Ale for $1.

Tracie Kinaitis, a resident of Munroe Falls, brought her family up to the festivities.

“It’s wonderful the city does this. The fireworks were awesome. It’s great for the kids,” Kinaitis said.

While listening to classic Christmas songs like Jingle Bells, It’s a Holly Jolly Christmas, and Frosty the Snowman, the crowd rushed for the opening of the ice skating rink, a taste of Christmas Ale, the reindeer run sledding for the children, and the many concessions and vendors.

After the lighting of the tree, the fireworks began, shooting red and green flares into Akron’s sky. With less than one month until the holidays, the crowd, watching the snowflakes fall, saw downtown Akron light up red, green and white, bringing cheer and smiles to many.