Student group builds for a good cause

In 1965, Millard and Linda Fuller visited Koinonia Farm, a small, interracial, Christian community outside of Americus, Ga. Here, along with biblical scholar Clarence Jordan, Fuller developed the concept of helping people in need of housing. From this concept, Habitat for Humanity was born. 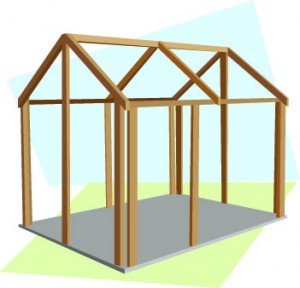 Habitat for Humanity is a Christian nonprofit organization that believes that every person should have a safe, decent, affordable place to live, and it strives toward that goal through volunteering and donations.

The organization builds simple homes for families in need. With help from the family who will be living in the house, a simple house is constructed for them. Today, Habitat for Humanity has built over 500,000 homes around the world.

There are many different branches of Habitat for Humanity. The University of Akron has one of its own.

According to Taylor Graham, the president of the Akron branch of Habitat for Humanity, there are about 30 prominent students in the group. The roles of group members are building houses, fundraising, teaching, raising awareness, promoting advocacy and tithing.

Dr. Carolyn Behrman is a professor at The University of Akron and the adviser for the group. She said it is lovely to get to work with this set of students.

“They are real go-getters,” Behrman said. “Unlike other organizations, they have to create relationships with other groups in the community, like the Summit County Habitat for Humanity.”

Behrman said that these students build themselves professionally. For example, students have had to go on interviews for grants to do projects.

So far this school year, the students in the group have had two Saturday workdays. On these days, they went and worked on a house, in whatever condition it was currently in.

“Students could be painting, dry-walling, putting up the frame of the house, or helping with siding,” said Graham, who is a sophomore majoring in exercise science with a focus on pre-physical therapy. “There are a variety of activities that the volunteers will do, depending on the state of the house.”

Also, the group held an awareness event on campus for World Habitat Day.

“We had an area in front of Auburn blocked off where there were planks of wood to be signed, a hammering contest, and a miniature house frame, all to bring attention to our group so we could spread the word about the large number of people who do not have any type of housing,” Graham said.

Over winter break, 17 students who have actively participated in the campus group this semester will be traveling to Oak Ridge, Tenn., for a week to assist the local branch, the Anderson County Habitat for Humanity.
“What they need done, or what state one of their habitat houses is in, that will determine what kind of work we will do,” Graham said.

“Last year, we went to Gulfport, Mississippi, so the drive to Tennessee will be much shorter this year,” Graham said.

This trip is just the beginning of what’s to come for Campus Habitat for Humanity over the next few months. During the spring semester, the campus group, along with students from the UA construction engineering program, will be building a shed for the community gardens in Akron.

“The community gardens is a patch of land with planting plots where nearby families can grow vegetables and flowers,” Graham said. “The vegetables can be used to feed their families.”
According to Graham, the shed, which will be 10 feet by 10 feet in size, will help water the garden with runoff collected on the top of the shed.

Also next semester, the group will be participating in a project called CrossRoads Mission. Graham said that during this event, students from the campus chapter, along with 75 to 125 youth from the community, will construct the entire framework of a house.

“This will happen in one weekend and is a very symbolic and moving opportunity,” Graham said.

This project will be funded by fundraisers the campus group has done throughout this semester. Graham said they have done many fundraisers, ranging from working at concession stands at Cedar Point and football games to a donation day at Insomnia Cookies.

Overall, the group’s goal is simple.

“The goal of our group, specifically, is to work toward Habitat for Humanity’s vision: a world where everyone has a decent place to live,” Graham said.

For more information on Habitat for Humanity, visit habitat.org.