The award is given to a student athlete who has shown that he has excelled both on and off the field. 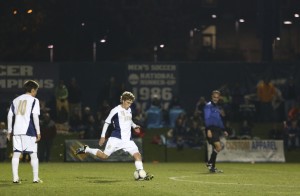 In order to be eligible for the award, the student athlete must show excellence in four categories: community, classroom, character and competition.

Scott Caldwell has clearly proven his worthiness in those four categories.

The senior midfielder was an NSCAA Academic All-America First Team honoree in 2011 and is a back-to-back Academic All-Mid-American Conference selection. Currently, Caldwell holds an impressive 3.934 GPA.

Scott Caldwell has shown he holds great character through being a captain for the men’s soccer team for the past two seasons.

His leadership has definitely helped the Zips each season, leading his team to the No. 1 rank.

Also, Caldwell has been involved in his community by volunteering at local youth soccer clinics in Akron, as well as back in his hometown of Braintree, Mass.

Competition-wise,Caldwell has shown that he is no pushover.

The 2012 Mid-American Conference Player of the Year is a candidate for the Hermann Trophy, an award that is given annually to the country’s top male and female college soccer players.

Caldwell has also helped the Zips their eighth consecutive Mid-American Conference Championship with his nine goals and six assists during the 2012 season.

Through these four categories, Scott Caldwell has proven that he is more than worthy of winning the award.

Fan voting for the award closed on Nov. 19, but votes from selected media outlets and Division I coaches are still being gathered to determine the winner.

The Senior CLASS Award winner will be announced during the 2012 NCAA Men’s Soccer College Cup in Hoover, Ala. on Dec. 7 and 9.