"Stories of the Kindertransport" to premiere at Sanderfur Theatre

Imagine being a child on a train headed for a foreign country, and having to endure the journey completely alone.

Nearly 10,000 Jewish children faced this reality at the start of World War II as they were sent out of Nazi Germany, Austria, Poland and Czechoslovakia, without their parents, to safety in Great Britain. 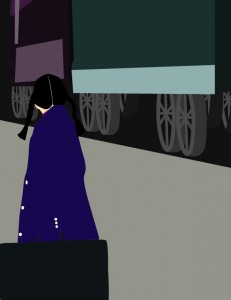 Many of the children never saw their parents again.

Vera Schaufeld recalled her experiences of the Kindertransport on bbc.co.uk.

“We all leant out of the carriage window, and my parents waved white handkerchiefs,” she said. “I didn’t know that would be the last time I would see any of them alive.”

Director Alex Funk said these stories needed to be told. He is currently pursuing his degree in theatre arts and said that he chose to direct this play because he acted in the production in high school and fell in love with it.

“It has such a powerful message about humanity, and it reminds us that we can come together to help each other in times of great need,” Funk said.

Playwright Diane Samuels was inspired to write “The Stories of Kindertransport” in 1989, when she was a young mother and pregnant with her second child.

“I saw a TV documentary commemorating the 50th anniversary of the Kindertransport, showing how 10,000 children, mostly Jewish, had come over to seek refuge in England from Nazi-occupied Europe,” she said on her website, dianesamuels.com. “I was struck at once by the ways in which parents and children struggled to deal with this desperate parting.”

Samuels used “to dedicate the play to the 10,000 ‘Kinder’ who left Europe over 70 years ago,” according to her website.

However, now she sees that “by entering the exceptional experience of those children who caught the trains to safety when many of them, like Eva (a character in her play), were too young to bear it, a crucial connection can be made with the clinging child inside us all that never wants to let go, no matter what.”

“The Stories of Kindertransport” is about humanity and family, Funk said.

“I think that humanity is one giant family, and what happens to one of us affects all of us,” he said. “As families, we may not like everyone, but we love everyone anyway, because we share something in common. That commonality is that we are all human. If we work together, we can solve anything that comes our way.”

The message that Funk wants to resonate with his audience is “that sense of commonality and a sense of family. That even though we are different, we can still thrive together.”

Production stage manager Amanda Miller has worked tirelessly in preparing the show for its debut.

“Audiences can expect to travel through a range of emotions,” Miller said. “There are moments of utter despair and moments of joy and excitement. I hope that they leave the theater with a feeling of hope. While we are telling the story of a very sad part of our world’s history, the story is meant to show that the kindness of the human race can be able to overcome our trials.”

Nici Romo has worn several hats to help bring this production to life. She produced and acted in the production.

“We have been talking about this show for a long time,” she said. “It’s bittersweet to see it finally take form. I am also the president of Theatre Guild, and this show kicks off our season, so on a business level, I really want it to do well. I think that this is a show that will leave a lasting impression on our audience.”

Romo said “The Stories of Kindertransport” is unique.

“This show is also made up of monologues from real people, and there is also a fictional story. I think the marriage of the two is really fun. I hope that people take away the fact that good things can happen in horrible situations.”

The cast consists of 22 actors, including children.

Josie Reynolds, an actress from Miller South School for the Visual and Performing Arts, plays one of the children, Vera, who rode on the Kindertransport and was adopted by a woman named Ms. Rainford when she arrived to England.

“I hope the audience will take away the fact that this really was going on in the world at that time, and that there were kids that died, ranging in age from infants to teenagers,” Reynolds said.

Actress Jovana Bukvic found the show to be a very interesting experience. She said that she had a difficult time speaking with a German accent that her role required and found herself slipping into a Russian accent.

“I play a character who is a mother, which is something that I have yet to experience, so all of my character choices are being drawn from those with my own mother, and other women that have children,” Bukvic said. “This is completely different from using your own life experiences.”

Emma Picht, another actress from Miller South, plays the part of Gisi. Funk acted with her over the summer in the Ohio Shakespeare Festival at Stan Hwyet and asked her to be in his production.

Picht, 13, said that she connects with her character through their mutual love for music. She has been playing the violin since she was around five years old. She is eager to play for an audience next week when the show opens.

University of Akron English professor Dr. Michael Schuldiner teaches Holocaust literature and said it is important to continue to tell the stories of the Holocaust.

“The Holocaust was a watershed event,” Schuldiner said. “It taught us, and continues to instruct us, that despite the progress that has taken place, we are still very poor specimens of what we like to think of as ‘humanity.’ By keeping the memory of the Holocaust alive, we are hopefully preventing future genocides tomorrow.”