Men's basketball ready for No 16 Creighton

Come March, Akron’s men’s basketball team will likely need a marquee win to highlight their resume heading into the postseason.

The chance for that all-important victory could come as early as Sunday, when the Zips travel to Omaha to take on No. 16 Creighton.

“It’s not going to be easy by any means, but we feel like we have the team to play with (Creighton),” said head coach Keith Dambrot. 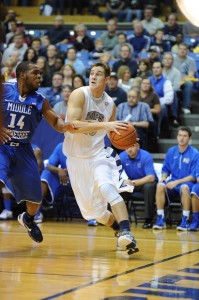 Momentum is on the Zips’ (4-2) side, as they are coming off of three straight victories, including an 82-77 (OT) win over the Middle Tennessee Blue Raiders.

The match-up between two top mid-major programs may hold weight three months from now, but for Dambrot, it’s all about Sunday afternoon.

The Zips have used a combination of new and familiar faces to score at least 82 points in each of their last three contests.

Kretzer is coming off of his biggest contribution in an Akron uniform. He made his 2-for-5 day count last Sunday, scoring all of his eight points in overtime. Two clutch 3-pointers were followed by two successful free throws in the final seconds to seal the win.

“Our teams don’t change much from year to year,” Dambrot said. “They just change numbers.”

In his last season in a Zips jersey, Marshall has produced career highs in almost every significant category.

His 12 points, 7.8 rebounds and 60.7 percent from the field are all career-bests. His average of 4.5 blocks per game is not only his best production to date; it also puts him third in the nation.

“Ultimately, I want to get in better position so I can be ready to go to the next level,” Marshall said. “I want to improve every part of my game that I can.”

Creighton will travel to in-state rival Nebraska (6-1) on Thursday, where they will rely on their standout junior, Doug McDermott, to fuel them offensively.

The 6-8 forward ranks 17th in the nation in scoring (21.3 points per game) and has the ability to score both inside and behind the arc.

The rest of the squad has followed McDermott’s hot shooting: at 53.1 percent, they are second in all of college basketball.

Creighton is ranked third in the latest mid-major top 25 poll, with the Zips trailing at 16 (College Insider).