Students use winter break to help others

While many students were using their Christmas break to catch up on sleep, a group of university students traveled to Oakridge, Tenn., to help people in need.

The UA chapter of Habitat for Humanity visited its fellow affiliate in Anderson County for a week over winter break. A group of 17 students worked on a variety of tasks to assist the affiliate, including cutting chest-high grass, building a porch, pulling out drywall and demolishing two sheds, according to Taylor Graham, the UA Habitat for Humanity president.

Graham said that it is not typical for their group to do multiple projects in different specialties, which differs from their work in the Akron area, according to Graham. Here, she said they usually work on one house, and each person works on what they have learned to do.

“Say I’ve drywalled before, so I work on the drywall and that’s all I do,” she said. “But there, we got to meet the entire affiliate. Each group had a construction manager and they were all retired engineers.”

Tim Marcum, the construction coordinator for the Habitat for Humanity of Anderson County, said that the UA students were able to help the local affiliate in many ways and kept a good attitude while doing it.

“The group from Akron was a motivated group of students that had the needy in mind from the time they arrived here,” Marcum said. “Their willingness to work, positive attitude and overall sense of urgency was greatly needed and appreciated.”

While the students were there, they met some of the people they were helping. Graham said that the woman who the students built the porch for made them cakes and other food every day they were there. They also put a brick sidewalk in for a habitat house that another woman had for 19 years.

Graham said that she has not been able to meet a family she has helped before, so finally being able to was a good experience.
“You just see how much they appreciate it and how lucky they are to have this opportunity. You can tell by their face,” Graham said. “They’re all just really awesome people.” 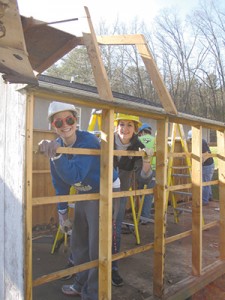 “Probably the most important aspect of their visit was to have a relationship with the homeowner and show her that there are still people (especially young ones) who care and want to make a difference,” Marcum said.

Graham added that while there was a diverse group of students on the trip, everyone worked well together to accomplish their goal.

“Everyone who went on the trip is of different backgrounds and different majors,” Graham said. “We were always together: when we had free time, when we were by ourselves…It was just a really great group of people that are willing to do good things for others.”

Look in future issues of The Buchtelite to see more information on UA’s Habitat for Humanity.