There is no denying it: The Akron women’s basketball team is one of the better teams in the Mid-American Conference.

It has been a long, tedious road for Akron head coach Jodie Kest. She inherited a Zip’s program that was never able to lift off the ground, while playing in a conference that is known for good women’s basketball teams. Because of a decent conference, Akron was held to low winning seasons, and the program was in ruins.

That fact, however, makes what happened Saturday almost iconic. 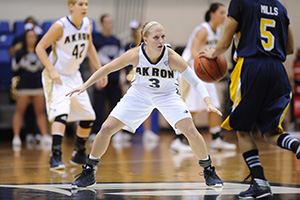 Akron fans became a little upset after it was known that the women’s basketball team traveled up to Kalamazoo, Mich., to Western Michigan (a-well -below-average-squad) and lost. Everyone expected the team to go there and win.

An identity has been created. A winning culture is now in place. The only thing left to do is “Finish.”
It has become a war cry, if you will. Akron has gotten past the first round of the MAC championship in each of the last three years. In the last two, the wins have clinched berths to the championship game in Cleveland. However, despite valiant efforts in each of the last two appearances, the Zips have come up short.

In 2011, Akron faced Toledo in the second round of the MAC Championship at Quicken Loans Arena in Cleveland. The Zips really had no business taking on the Rockets. Akron found itself in a barn-burner.

If it was not for Toledo’s star point guard Naama Shafir, who scored 28 points in the contest and had the uncanny ability to draw a foul virtually every time she drove to the net, Akron would have won. Instead, they lost 73-65, a differential that was enhanced only because of fouls towards the end of the game.

2012 was another heartbreaking season. The Zips were up by one over Northern Illinois with less than 30 seconds to play. NIU had one last chance score, and the Zips were able to hold the Huskies.

A wildly thrown shot missed both the rim and the backboard, but the rebound went to NIU defender Kim Davis. She put up the easy layup to give her team the lead and the eventual win. An opportunity lost, and a season was over.

The Zips are much better this year than they were in the previous two. And now, instead of trying to clinch a home game in the Mid-American Conference tournament, they are trying to clinch a first round bye. That may be one of the reasons why Saturday’s loss hurt so much. For a team that is trying to compete for such a unique prize, slip-ups like these can be costly.

After the contest, Kest spoke with University media about the road trip. She had a lot of things to say, but the underlying focus of her message was that her team was going to use the game as a learning experience.

“Hopefully we’ve learned some lessons from that game and can play a lot better,” Kest said.

Kest feels that her team is still growing and getting better. Which, if that is the case, the Mid-American Conference should be put on notice.

The question is not how far the Akron women’s basketball team can advance this year, but if they are good enough to compete for the MAC title. That answer is yes. But as Kest preached, it is going to take improvement throughout the year. Nevertheless, the talent is very much present.