Women no longer banned in combat

Thursday marked a big step for women in the military as the Pentagon lifted the ban on female service members in combat situations. The ban ended with the announcement from outgoing Defense Secretary Leon E. Panetta and sparked a debate between many as to whether or not women should be allowed to hold these roles in the service.

According to different news sources, the number of women who have died in Afghanistan and Iraq is about 150. 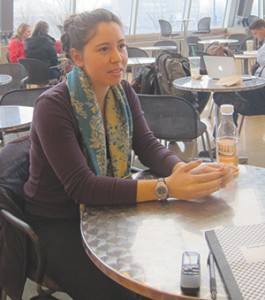 “It’s clear to all of us that women are contributing in unprecedented ways to the military’s mission of defending the nation,” Panetta said in his announcement.

Victoria Barrientos, the current president of the Military Veterans Association on UA’s campus and former psychological operations specialist for the U.S. Army, explained the process people in the military go through and why this process should be enough to prove women can go into combat.

Barrientos described a part of the process called selection, which is a program in which men are pushed mentally, physically and emotionally to prove that they are ready to go into combat.

“We’ve actually had people die in the process of selection,” Barrientos said, “because the whole point of the program is that no matter what happens, you’re willing to continue.”

She said that if a person has to stop and go to the medic, they have to be recycled and go through the whole process again, which is not
an option for many of these men.

She also described Survival, Evasion, Resistance and Escape (SERE) School, which is a program that focuses mostly on survival skills and how to avoid capture and torture.

Other people, like retired Lt. Gen. Jerry Boykin, think that this is not a matter of whether or not women should be allowed in combat. Boykin, who was one of the original members of the U.S. Army’s Delta Force, thinks it is about whether genders should be mixed in units.

“There are many distractions there that put a burden on the small unit combat leaders and actually creates an environment because of their living conditions…” said Boykin in a recent interview with Fox News Insider.

Many women disagree, including Barrientos.

“A unit, no matter whether it’s just men, men and women, or just women, is a family. It’s not about tension, it’s about partnership and the better the leadership is, the more cohesive the unit is,” she said. “It is not a soap opera, by any means. It’s not about gender; it’s about doing your job.”

“I think this is more of a social and cultural issue, because women are seen as mothers, wives, and daughters,” Barrientos said. “We are not seen as much as we’d like to, as equals in today’s society.”

The emotional differences between men and women has also been a factor in this debate, with some saying that women share their feelings and will not be able to control their emotions in combat. Others say the ability to express themselves can help.

The ability of men to express themselves is becoming more widely accepted, as well.

“The social norm of men being very closed emotionally is changing and we’re actually making it so that men can be an emotional human being, too,” Barrientos said. “The ability of women to communicate better what they are feeling, what I believe is a pro, is actually seen as a con by men.”

Barrientos said that this can be seen as a positive thing because being able to communicate well will help if a woman ever has a psychological issue. She will be more willing to go see someone to get help.

Overall, Barrientos said that she believes women should just have the same rights that men do.

“We are not saying we are capable of everything,” Barrientos said. “We are just saying that there are a few women, just like there are few men, who are capable of these jobs and they should be given this opportunity.”

According to CNN, the Army and the Marines plan to open up many jobs to women on May 15.