UA candidates get slimed for charity

A stage in the Student Union Starbucks was covered in green goo right out of a ‘90s Nickelodeon game show on Wednesday night as three prominent members of the University of Akron community were slimed for charity.

Up ‘til Dawn, a student group that hosts an all-night event to raise money for St. Jude Children Research Hospital, hosted a side event called Slime Time Live. 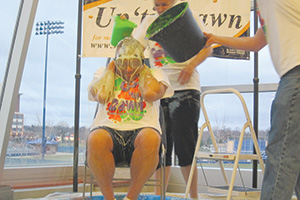 “The students voted for their favorite candidate by donating money and change to that candidate’s change jar. The top three candidates to be slimed were then picked by the total amouont donated in their name,” Brittany Atkinson, the public relations & marketing chair on the Up ‘til Dawn executive board, said.

The list of candidates was narrowed down Wednesday night from 10 to five. 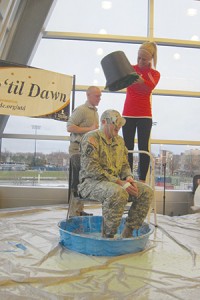 The top five were then narrowed down to the top three, which were Ferguson, Patterson and Doyle. Once the group was narrowed down, people were able to bid for the chance to be the one to pour the slime. One person bid $10 to slime Ferguson and another bid $30 to slime Patterson.

Charleza Gordon and Kandace Sheets, both members of the ROTC, came to the event in
the hopes of seeing Patterson slimed.

“I think it’s a great cause for the kids,” Gordon said. “I think they should do more events like this around campus.”

Gordon said she participated in another Up ‘til Dawn event in which students wrote letters to their loved ones asking them to donate money for St. Jude.

“I thought it was really cool for people to vote,” Sheets said about the slime event. “I would definitely take part in this again.”

“The Slime event was outstanding in that we were able to raise so much money for St. Jude Children’s Research Hospital and that we had tremendous participation from the University,” Atkinson said. “Our main goal at Up ‘til Dawn is to spread awareness about the hospital and this event really helped us to reach a lot more people, I couldn’t be happier about that.”

This event wasn’t the last for the group, though. Up ‘til Dawn is hosting their finale, an all-night challenge for charity, next Friday. According to the group’s Facebook event, students can pay a $5 admission fee to enjoy food, games, music, inflatables and giveaways. There will also be performances by Of Orion and Rhythm and Roos.

Other events include Chili’s Night on Feb. 6, and Chili’s pancake breakfast on Feb. 23.

For more information on Up ‘til Dawn, visit stjude.com/utd, or UA Up ‘til Dawn’s Facebook page.