In light of the recent school shooting tragedy in Newtown, Conn., several students on campus are trying to put together a group to push for the legalization of concealed guns on campus. I never thought that the political dialogue in this country could get so ridiculous as to suggest that allowing guns on a college campus, or any public place for that matter, would lead
to better safety. Yet, the real world apparently is much crazier than I thought, so this issue demands a response. 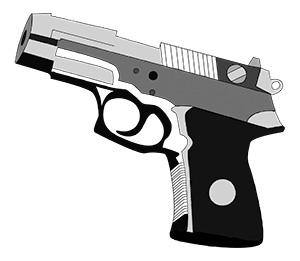 First of all, the burden of proof lies in the hands of those that make a claim. Pro-gun supporters claim that allowing guns in public places will make everyone safer; they may say something like, “if
only an armed person had been in the theater at Aurora, Colo., or (insert the name of any mass shooting event).”

This is a tired argument that has been thoroughly and completely refuted, yet continues to pervade the reasonable conversation on gun control. Setting aside the fact that smoke bombs were used in the Aurora shooting, which filled the theater with smoke, decreasing visibility in an already dark room, as well as ignoring the fact that the perpetrator was wearing body armor, the pro-gun advocates have failed to build a reasonable case (other than unrealistic, hypothetical situations), to support their position.

On the contrary, there is very strong evidence, based on real situations, of why guns in public places are an absolutely horrible idea.

First, there was a mass shooting at Fort Hood. I can’t imagine a more heavily armed place than a military base, and even that heavily armed instillation was unable to prevent a massacre.

Second (if you even needed a second example), there was an armed guard at Columbine and it didn’t do much to stop the massacre either. Many people don’t realize this, but deputy Neil Gardner was eating lunch when Eric Harris and Dylan Klebold opened fire on students. A custodian called Gardner for assistance. While responding, Gardner encountered Harris and exchanged fire. Gardner was pinned down, took cover and called for assistance.

Now, I use the term “good guy” because there seems to be this misconception that when a shooter comes, we’d easily be able to identify the perpetrator from innocent civilians. As things currently stand, the person with the gun is considered an active shooter. When police respond (you know, the people trained to protect us, especially in instances like this), they are looking for the perpetrator. In a heated situation, with shots being fired, there is no way to separate good guys with guns from bad guys with guns, unless if they are uniformed police officers, but even that is no guarantee.

A.L.I.C.E. training here on campus, which the University of Akron police department often teaches to freshman classes, preaches never to pick up the gun even if the assailant is subdued. This is because the police (or the “good guys”) may mistake you for the perpetrator if you have a gun in your hand.

If that wasn’t enough evidence to utterly refute the ridiculous contention that guns should be allowed on college campuses, there are a myriad of instances where legal concealed weapon holders have accidentally killed or harmed people.
In 2011, Justin Campos, a licensed concealed weapon carrier and member of the National Rifle Association, shot two men dead after a heated argument.

In 2012, Moises Zambrana accidentally discharged his handgun in a Florida church, killing a 20-year-old woman.

In 2012, a licensed concealed carry holder in line at a Pizza Hut shot another patron in line, after the patron complained about the wait for his pizza.

In 2012, a Los Vegas man’s concealed weapon discharged as he sat on the toilet, injuring another man in the stall next to his.

This is a small, very small, list of the instances in which concealed weapon carriers did more harm than good. The fact is, it doesn’t matter how safe you think you are or how careful you are. Mistakes happen, and they happen far more frequently than instances where guns in the hands of “good guys” help the situation. Guns were designed explicitly for the purpose to kill: period. There is no other reason that firearms exist than to be the most efficient way to kill something else.

The potential for accidents far outweighs any potential benefit from allowing guns onto college campuses. Great Britain has strict controls on their firearms, and since Columbine, Great Britain has had zero school shootings. The United States, on the other hand, has had over 150.

More guns simply does not equal more safety. And the Second Amendment does not allow you unlimited access to guns for whatever purpose. No one said it better than a ruling by the Supreme Court in 2008, “…the Second Amendment right is not unlimited. It is not a right to keep and carry any weapon whatsoever in any manner whatsoever and for whatever purpose.”