One foe has always been able to top the Akron women’s basketball—the Bowling Green Falcons.

Bowling Green (13-6, 4-2 MAC) is a perennial powerhouse in the Mid-American Conference, and owns a 47-2 record against the Akron Zips. Their dominance dates back to 1978, when Akron was in the early stages of their program; Bowling Green has never let Akron off the hook. 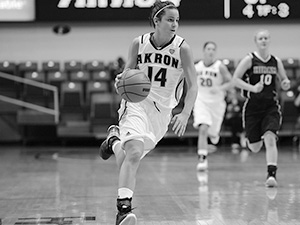 Akron had hoped to turn the corner this season and compete against the best in the conference. However, the previous two games, coming against top teams Toledo and Central Michigan, have been worrisome. Akron fell to Toledo by 12 points at home last week, while Central Michigan thoroughly thumped the Zips in Chattanooga, Mich. with a score of 92-69.

Akron will get another shot at one of the best teams in the conference this season. However, this time around, they will be facing a team that they have had major troubles with.

The Zips and Bowling Green have had some competitive tilts in the previous years. In 2011, the Zips were ahead throughout the game, but were put away in the waning seconds by a three-pointer as the buzzer sounded, losing by a single point. That was the closest that Akron has gotten to winning against the Falcons in the past 10 years. In 2012, Akron only lost by five, but trailed most of the game. They were able to make a comeback towards the end of the contest to make the final score better than what it had been for the majority of the game.

Bowling Green lost their head coach Curt Miller, who led the squad in its best season, to Indiana this year. Despite having to find a new leader, the program has not fallen backwards. Bowling Green is 6-1 on the road this season and is tied for second place in the Mid-American Conference East division.

Bowling Green is anchored by senior guard Chrissy Steffen. She averages 10.8 points per game, nearly
30 minutes on the floor, and is in the top four of assists, blocks and steals on her team. With this impressive record, Steffen has taken over as the leader of her squad.

Though Steffen has been a consistent for the Falcons, she has had help from redshirt guard Alexis Rogers. Rogers leads her team in scoring at 10.9 points per game. She has accumulated 197 points so far, making her second on her team. She has also been productive when it comes to steals, having 29 takeaways, which leads her team by a significant margin. To beat the Falcons, it is important
that the Zips are able to contain her.

This year the Akron Zips will attempt to shake a losing streak that has haunted them since 1978. Bowling Green has been able to beat Akron since, seemingly, the beginning of time. If Akron is able to get through their defense, things will be looking good for the Zips. If they are
not able to come out on top, questions will surround the program as to whether it will ever be able to sit atop the Mid-American Conference.